0
one of my favorite tv shows these days is the discovery channel’s “survivor man”.  in case you have not seen it, it’s a show that is supposed to teach you how to survive in the wilderness. well, today i had this idea for a tv show, probably on comedy central.  i was running late this morning on my way to work, so i didn’t have time to pack any lunch.  besides, someone ate the leftover taco bell that i was thinking of taking in for my lunch.

so there it was 12:10 and my stomach was at an all time low.  i dug around my office looking for some food. i sometimes bring extra non-perishables and leave them in my desk for just such an occasion.  i kind of hit a “jack pot” when i found some top ramen.  so off to the kitchen to “cook” it.  i opened the fridge just to see if by any chance i had some abandoned lunch from earlier in the week.  another jackpot….. i had some turkey that i brought in on ….ummm…. i think it was monday.  let’s just hope it was monday.  i also had some carrots probably from that same day.  i “cooked” the ramen and filled it with the turkey.  so i’m pretty excited how i managed to make a decent meal from basically scraps.  people were passing by the lunch room, commenting, “how can you survive on that stuff?” huh… i chuckled to myself, they didn’t know i had turkey in it :) i actually felt a little stuff afterward….. until. until the terrible pain in my side started. i think it’s my imagination, in fact i think it is my imagination that made me think i brought the turkey in on monday!

i should be ok, by the time i ride home.

there is a message in this… 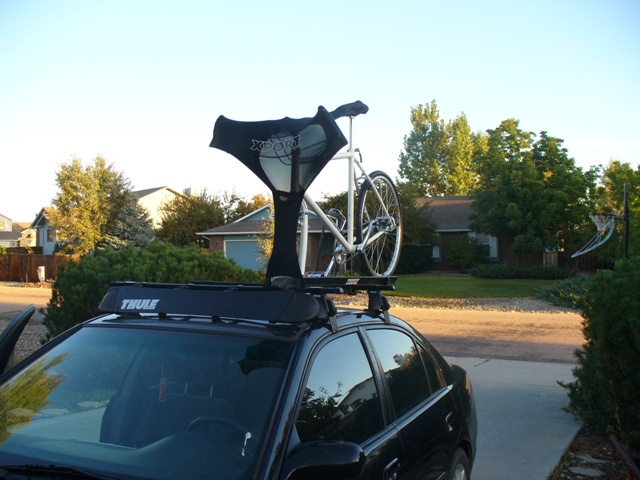 on the days when i don’t ride my bike into work, i usually throw it on top of my car and hope for a lunch ride or an early release. this hardly ever happens and i think i just end up posing instead. telling the local world that i am “into” cycling… so i am better than you. my car has almost become an icon around here, like those big plastic bugs mounted on the top of an exterminator van. i always start to feel pretty lame if i ever do this more than two days in a row. i don’t think anyone really notices, but i don’t want to give them the chance. … “hey, it’s the black-car-white-bike guy!”

it was kind of a low key day at work so i snuck out about 5. everyone but two guys were left. i guess the sense of urgency and dedication drop off after the bosses leave. i headed out to my favorite trail, and got there within a half hour. the lot was kind of sparse so i parked next to a forrunner for some privacy. after all i had to get into my cycling clothes. parking-lot-changing is kind of a lost art. some people are so subtle you hardly know they even changed. others are so obvious that it usually creates a scene and everyone knows to look away. some people fall somewhere in between. this is the most dangerous style of the two styles. this is where you start the change very discreetly, perhaps a little too discreetly, and no one knows you are changing and turns the corner and ….”hello”.

yesterday i was trying to like the the former group. i tried not to bring any attention to myself and organized all my stuff, ready for the pants-shorts swap. just as i unbuckle, the owner of the forrunner arrives. turns out it’s a young twenty something female. i think it’s rather inappropriate to be showing my business in this setting, and she wasn’t here for the “pre-show-warning” where i got into my car wearing my engineering clothes and carrying my cycling cloths in my hand. i was going to get out and do it all over again, but my pants were already pretty unbuckled and i couldn’t even take care of that without witnesses. besides, i couldn’t keep track of her. she kept appearing out of no where from the back of her vehicle to the side.

i was just waiting for someone to come over to me and ask if i had tire pump they could borrow, or trail info or something, and me sitting there like a pervert with my pants open. it was going to be getting dark soon and she was in no apparent hurry to take off. finally when i thought she was out of sight, i just went for it. i was pretty fast, but hardly subtle. i was really rushing through it and of course the cycling shorts were not in the ready position, so i had to quickly turn them right side out, and put them on. not more than thirty seconds after i committed to the change, she started up her car , and almost peeled out of the lot like it was on fire or something. jeeze….was it something i did?

i ran out of light pretty quickly and only got about 4 miles in.

p.s. i am way behind on my cycling post, i still have a bunch of rides with the new bike to write about. please aware that they may show up out of order.

pretty good day, except for…

1
today was kind of a rest day of sorts. it was a little too cold and i was a little too late to ride in, so i just drove. i didn’t have anything too pressing since my robot shipped out yesterday. what happens when it gets there is another story. i got to work and before work had a chance to start, i had a great conversation with someone. a little later in the day an old friend called out of the blue. didn’t get to talk much, but it was cool to talk for a bit. over all, not bad for a monday. i was feeling pretty good, until…. i’m not sure i even want to talk about it. i’d better talk about it so it doesn’t cause any serious problems.

i had just gotten up to go to the little engineer’s room. i was happily walking across the office, and i think i was even whistling, i don’t remember what song it was. it could have been if i had a million dollars, maybe it was something by johnny cash or rick james…. anyway that’s not important. i went over to the restroom, and opened the handle. every time i open the door there is always something out of order. most of the time it just smells. other times something is plugging it, and other times it’s just a mess. in every case its something gross. today i wished there were such trivial matters behind these doors. i opened the door as if to take a step inside when i heard and saw at the same time someone sitting down taking care of “business”, yelling, “no….no…wait…”. i stood there frozen in shock. kind of a deer-in-headlights look on my face i’m sure. as if the situation on its own merrit wasn’t deservant of being horrible and traumatic, the person sitting down was my boss!

i went back to my desk and buried my head behind my undersized monitor…. and tried to stay out of sight for a while. the next few hours were pretty disturbing, but eventually it left my memory. i had all these work related questions to ask my boss, but decided to just take a stab at the answers on my own to avoid any awkward situations. i almost made it to the end of the day, until just before i was about to leave he called me over to discuss something with another one of my bosses [“i’ve got 8 bosses bob”]. earlier i had told the other boss about the situation, and so he laughingly brought it up during this meeting. he though it was pretty funny…. i’m actually glad he brought it up. i think the situation will be long forgotten by tomorrow…. i hope.

2
ok the rest of the day turned out to be crap, but the ride home…. just awesome. i had to work late because something i was working on broke at the last minute, and we can’t get another one in time for my big show in vegas. it was almost dark by the time i left, because i had to put all my lights on. i had taken them off for my weekend riding. the weather was perfect again, i could still wear shorts and short sleeve jersey. once again i wore the ipod ear buds to make the trip a little more relaxing. tonight i used the same music i had for for breakfast… it didn’t let me down. i was going to take an awesome picture of the sunset, but my camera’s battery was low and it refused to snap the shot.

everything was so smooth. the gears shifted effortlessly as i climbed the gentle hill out to the first light. as i waited at the top for straight green i could see the under-anxious faces of the motorist as they turned right in front of me. through the green i started my crossing of the merge lane. the usual is pretty tricky since the mergers are pretty nervous about merging and no one wants to wait for an ex-cyclist. tonight i was preparing for the mergers when i looked back to see if i could cross and there was an suv with a super cute lady inside just smiling and waiting for me to pass in front of her. if you insist :) flying down the back side of the hill towards the bottom i have no bike lane so i join the cars to make a sharp right hand. the bike is so light on top that leaning it over to turn feels like it’s not even there. the whole turn was just pretty neat. i don’t know why it was so much better than last week, or the week before. that’s the coolest thing about cycling a lot…. if you just keep doing it sooner or later you will have a ride like this and when you get home you won’t even remember the work day.

a note from the webmaster

1
i finally got these embeded youtube videos uploaded.  it seems kind of flaky…. i actually had to edit some java script to get it working…. if you the videos mess up the format of the blog please let me know and i will try to fix it.