the mind of an ex-cyclist

2
it has been a while since i wrote last. usually my lack of writing corresponds to my lack of cycling. this case is no exception. it’s been about 13 days since i rode to work and about 15 since i did any kind of serious cycling. oh, the racing? well that didn’t happen either. it got canceled the day before i was about to do it. i think my online psychokinesis lessons are finally paying off. with the racing out of the way and job intensifying i hardly found the energy to ride my bike. except for yesterday.

my son woke me up at 6am, to ask if he should drive to swim practice, being that there were 4 inches of brand new snow on the ground. i told him to skip practice since he’s a relatively new driver. after we settled that little bump in the road….all i could think about was the snow on the ground.

when you hear this, bare in mind that i haven’t found the time or energy to ride my bike to work for the past two weeks. now there is 4 inches of brand new snow on the ground, i wasn’t contemplating if i should ride to work, the only thing i was contemplating, was, which bike do i ride. my bike of choice was the bianchi, with nokian hakkapeliitta studded tires. the bianchi was sitting in the garage tireless, since i stoled its cross tires to put on my “cyclo-cross” rig.

these hakkapeliitta tires are so freaking heavy and stiff. they are made with an extra thick wire bead around them which is near impossible to put around my campy rims. [note: when i search for these tires so i could put a link on this post, the only tires that came up were for suv’s!]. while muscling on these beasts, i didn’t quite break my tire iron, only bend it…. i did however, manage to draw blood from two of my knuckles. luckily, i didn’t notice that i was bleeding till the project was complete. i happened to find the blood drops on the floor.

after the tires were on, i went back into the bedroom to pick out my clothes for the trip. it took me so long, but i finally picked out some stuff that would keep out the dirty melted salty road snow, and still keep me warm. not an easy task, i must say. i headed out the garage ready to brave my current adventure. feeling strong and surefooted from the studded tires i cruised out the neighborhood to the sounds of radar love. when i got out to the county road, the snow had not been completely plowed. only the middle part was taken care of, which was rather unfortunate since i like to ride my bike on the shoulder. however, the shoulder didn’t just have 4 inches of powder on it, it was riddled with dirty frozen snow balls from the debris of the plow. i tried riding straight through them, but the skinny tires just got pushed around. even though i had some pretty sweet studded tires, i couldn’t really weave through them, it would have been too dangerous. i ended up, riding off the shoulder down toward the dirt. this wasn’t too bad but i didn’t know how long i could continue this. it turned out to not be very long at all.

the whole thing was just really sketchy. i felt like i was going to slip and fall into the road, and get smashed by an on coming car. i made it through a really bad section, only because there were no cars. the big highway was only a couple miles from my house but by the time i got there i was in a full sweat. the clothes i spent so much time choosing turned out to be exactly wrong. with all the technical death grip riding i had done so far i was having a pretty good work out…a little too good.

the big highway had a big shoulder …. and bigger frozen snow balls :(. after about a mile of pure suffering and intense fear, i decided that i had had enough, plus i was already an hour late for work, and it would have taken me another hour and a half to finish the ride. i turned around, rode back home through all the same type of stuff i rode on the way out… only on the opposite side of the road.

i got home took another shower, and drove in…. i feel pretty lame that i didn’t make it, but sometimes common sense eventually hits me and i do the right thing. it doesn’t happen very often, but when it does, i think everyone is better off.

leonard published 14 years ago in ex-cycling, not me.

0
here are some more pictures from the boulder cup.

i’m not sure who everyone in the picture is….. however; if you look to the left [#55] with the pink socks and single speed, is no other than my hero travis brown.

live shot of todd wells over the first barrier.

and now over the second.

wow is that “the” chris horner?

faux pas [at the movies]

0
the family and i went down to the denver film festival tonight. we went to see a movie called skills like this . since it was filmed entirely in denver, it was a pretty big deal to be there [at least for small indie films]. some of the actors were there, some of the extras [including my kids]….and the director himself. the director introduced the film and then left the room. i guess he had seen it a thousand times and really didn’t need to see it any more.

it is a really funny/fun movie. if it ever makes it to the silver disk, make it a point to put it in your queue.

don’t you get distracted when people leave a movie during the middle, for some unknown reason? i do and i always think it’s kind of rude. can’t they just sit there for two hours, like the rest of us? well, tonight was my night. i don’t know what i ate, but something was giving me gas. i did a pretty good job of controlling it, but after 45 mins sitting in the movie i just couldn’t take it anymore. i had to leave. i tried to leave quickly so i wouldn’t disturb anyone…so i just bolted through the doors. funny observation: standing right outside the doors was the director and his lovely wife. they were the only two outside as if to guard the doors or something. i know he was thinking the same thing i usually think, “how rude!” probably though i was some kind of dirt bag for not watching his entire move. i tried to not make eye contact… and rushed down the hall to the restrooms. took care of the thing that was bothering me and headed back to the screen…. only, they were still there, just the two of them, guarding the doors. i politely smiled and went back in. do you know how bad it is to get caught being rude during a move, by the movie director himself???!?!

at the end of the movie i tried to suck up some, but i think it was way too late. i told him that he did a “good job” and shook his hand…. lol. boy i’m not obvious.

0
here is a picture of the bike i plan on racing with this weekend. i know what you’re thinking…..”that looks like a mountain bike”. well, you’re right, except that i put 700×32 cross tires on it…wooo hoo! right now it has a massive [in size] 20 tooth ring in the rear, but i’m going to put a 16 on it tomorrow, and see if i can ride it to work. 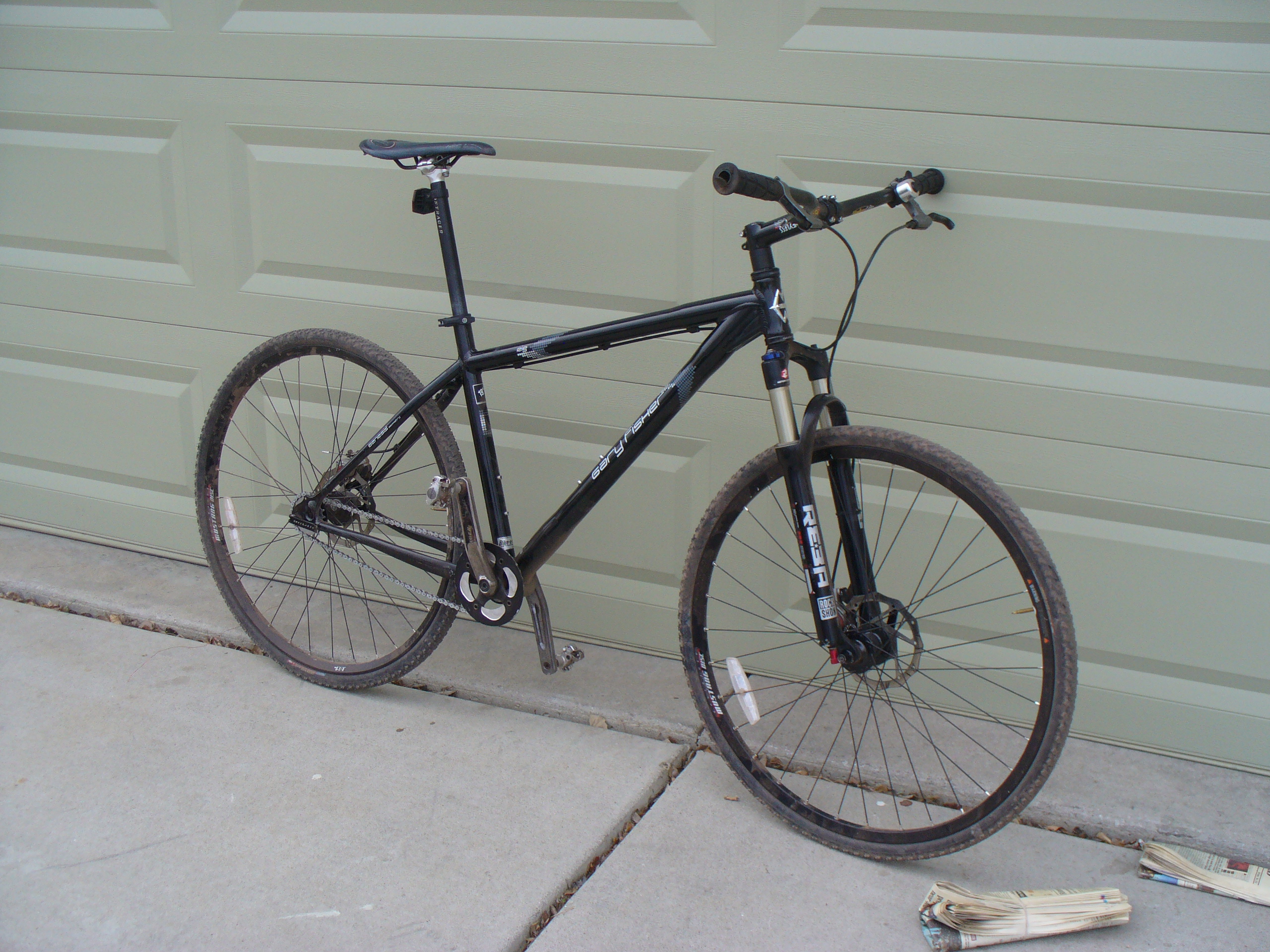 1
i went out to the boulder cup cyclocross race this weekend. i didn’t race although i was tempted to jump into the cat 4 race. it was a very good idea that i didn’t think that for too long. i would have had my ass handed to me in a pannier. i’ve been so anti-racing for a few years now… just watching these guys kind of triggered something in me. i think i want to race again. i’m going to look around for a slow-fatso-race somewhere and see if i can enter. i wish they had a cat 5 or cat 6 cyclocross race.

here is a video from the race. it’s os todd wells bunny hopping over the barriers. he was the only one that was able to do this. it was really amazing to watch.

the week in review

0
it’s been a bad week as far as cycling goes.  almost everyday there was something to keep me from riding in.   monday i just got so late i couldn’t ride in without getting fired.  tuesday i had to hurry home for something, wednesday i had a lunch date, thursday, i had to have the car for backup in case my wife needed me to take the kids somewhere.  so anyway i all came down to friday. i was actually really looking forward to riding to work again. i had some new music i knew was just going to tryout.  have you ever had some music that you listen to in headphones and just fall in love with … then you listen to it on regular speakers and it sounds just ok?  as you listen to it with the crappy speakers you find yourself saying thing like “this part sounds really good with the head phones”.  so i had this new album by touch and go and it sounds so cool with the headphones. i had been listening to it since monday, and i have been thinking about how its going to feel on my ride in to work.

so friday i listened to it while riding in.  actually i had been listening to it all day everyday this week…. i really like it.   i think that i kind of killed the whole new music effect because when i was riding with my ear buds it just didn’t sound very dynamic, the horn just didn’t have the same feel to it.   the beat does have a higher tempo that some of my riding music… and after two songs i was pretty tired.  it was still a nice day, and the weather was pretty chilled… about 35-40 degrees.  next time i get new music, i think i’m not going to listen to it till ride day.

oh i almost forgot. the ride home didn’t go so well. i ended up getting a flat.  i think it was a slow leak at first but then i hit some railroad tracks and i could feel the rim taking the blow.  shortly after that the tire went flat.  i thought that i had a pinch flat, and it’s very hard to change the back wheel [which is where the flat was] especially at night. i called my son to come out and pick me up.

while i was waiting for him i tried to fix the flat. it turned out that the stupid “slime” brand liner wore through the tube and created a hole.  this is the second time this has happened to me.  i’m not sure what the problem is, either a baggy tube, or a liner that is too wide.  still it’s pretty lame that the liner caused the flat…twice!  i’m going to have to figure this out… my other bike does not have this problem, it also a different brand liner.  i wouldn’t recommend the green slim brand teflon liner.