0
well here i am in my early 40’s and i am the proud owner of seven bikes. we have a “two car” garage and my wife uses her half for her vehicle, and i use my half for my bikes.  my poor car has to withstand the elements year round in order to accommodate my bike family. if only i had a bigger garage. it’s not like just have 7 bikes and ride only one or two; i ride 6 of them, and one is kind of out of commission right now.

one is a 1993 white diamond back with an internal 5 speed hub, and midge drop bars. it’s a very distinctive bike and i get compliments on it all the time.

a 1979 girls azuki 10speed that i bought off of craigs list. it’s no longer a ten speed, and it is now spring green with an internal 3 speed hub and a black basket in front [i will have pictures on this site soon].

1982 bianchi san remo [birthday bike]. i’ve had the bianchi for years, and this year after my trip up to the rocky mountain park, i decided that the components were not suited for long tours. they were just too old, and loose. two weeks ago i completed the renovation and this has to be the best bike i’ve ever owned.

old raleigh 10 speed. i don’t know much about this bike except that it was given to me by a coworker. i’m just starting to renovate this bike, but it may take a while because i don’t want to spend any money right now.

2000 schwinn moab. this was my racing bike for a few years, and now it is a single speed. this bike was so awesome, especially when i had the crossmax tubless wheels and full XTR components. currently it has a worn shock, that i am trying to replace.

2001 schwinn peloton. i got this bike when i was mountain bike racing and i wanted to have a bike the i could train on the roads with. i also used it to commute to boulder when i worked there.

2007 gary fisher single speed 29’r. this was probably my mid-life crisis bike. this is such a cool bike however. it took me a while to learn to climb technical stuff with it but now that i am used to it, i can go anywhere.

so recently the wife has been pressuring me to sell one of my bikes, and i kind of feel that i have too many as well. i was going to sell my girls bike, but then i just can’t do it. i put a lot of thought and work into that bike, and it looks so beautiful. i decided that i would sell my non-refurbished bikes. either the peloton or the gary fisher.

i’ve been mountain bike riding with this guy from work, and loaning him my gary fisher. he really liked it and i offered to sell it to him for a reasonable price. he was really excited about it. i told my wife that someone wanted to buy one of my bikes and she was really excited about that. unfortunately i was not happy about it. i thought about all the good times i had on the bike, how cool it looks, how excited i was when i bought it….. i just couldn’t do it. i lost sleep over loosing my bike. i’m sure my bike would have gone to a good home and all that, but i just couldn’t bring myself to selling it. i apologized to my friend, he was a little disappointed, but he understood. i’ve been so happy ever since.

the moral of the story? i guess it would have to be something like: if you can provide a good home for something…. keep it.

0
a while back it was earthday…and i wanted to do something special that day. i haven’t been riding my bike that much, but still, riding my bike to work didn’t seem that special. besides i figured that there would be tons of people out there doing the same thing. so i decided to ride my unicycle to work! 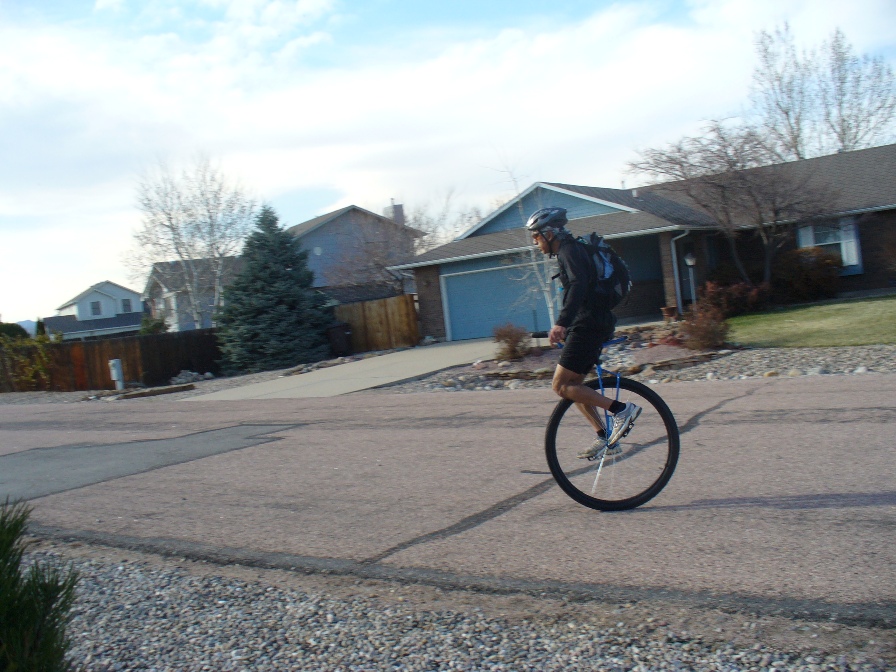 my average speed was about 10mph. it was pretty tough, mostly because my but is not used to being in the saddle that long. only one horn honk.

0
it seems that nothing is quite working out these days. my life has been turned upside down because of the demands of my job. i am struggling to keep my life as normal as i can, but riding my bike has taken a back seat….until this past weekend. it’s not like i finally looked in the mirror and saw my fat ass or anything. instead, i filled up my car with gas, and almost went into shock when i saw the pump roll over 40 dollars. by the way i drive a honda civic that has an 11 gallon tank and gets about 35 mph. i can’t believe that it is now cheaper for me to have the oil changed on my car than it is to fill it up. i don’t know how people with less fuel efficient cars do it…..

here in colorado, companies are required to pay a certain amount for miles driven while doing work related activities in your car. this doesn’t include driving to and from work [but it should]. it only includes things like driving to and from the airport on a business trip, or driving to a meeting in another city or whatever. the state reimbursement rate is now up to 51 cents per mile. this means that it now cost someone 51 cents a mile to drive their car. my drive to work is 17 miles one way, so each day i should get reimbursed about $17.34. i don’t get anything, so it ends up coming out of my pocket. i’ve been working at least 6 days a week, that’s over 100 dollars a week, or 400 a month! no wonder this family has no money. i can not drive any more…. that’s it. i can’t afford it. that’s not even counting my wife and my son’s driving.

i have all kinds of excuses to not ride today, but i’m just going to do it anyway.

have a nice day.