2
i almost got out of jersey on friday, but as luck would have it…my stupid robots decided to not start up.  i hate robots, i really do!   perhaps, it’s just these robots that i really hate.

a lot of people have misconceptions about robots.  most people think of robots as being androids, like the ones in the irobot movie.  robots that can help you out, and talk to you….and eventually kill you if a malicious virus infiltrates their main processor.  my robots don’t talk nor do they look or act human-like,  but they do piss me off like some humans.  i’m sure if they were equipted with a hand-like gripper, i would regularly get the servo-driven middle finger.   robot rage is the most human like characteristic they possess….occasionally they have separation anxiety,  as they showed me on friday.

so what kind of robots do i work on? well, my robots, usually only do one thing. they pick up randomly places things and place them precisely  into something else.  isn’t that exciting?  they actually move at 120 cycles a minute.  i usually can’t see what they are doing because it’s difficult to focus on something moving so fast. i know what you’re thinking,  “yawn….. super fucken yawn!”  me too actually.

robotic separation anxiety  is what keeps me here in new jersey.  not doing anything this weekend, because i’ve been really sick.  friday afternoon i went to bed because of a fever, basically i stayed in bed till saturday morning.  i had to work a few hours on saturday, but i’ve been getting better by the hour.  this morning i felt pretty good… good enough to go for a run.  not really, but i had to for mental reasons.  in fact i’m glad i did.  it was raining a pretty hard, but it’s really warm.

now i’m sitting here at “atlanta bread” in jersey, with a sticky bun a latte and free wireless!!!!  praise the lord.

leonard published 13 years ago in ex-cycling.

1
thursday was my birthday, and i woke up without a plan.  i wanted to do something challenging like i do every year, but this year i am so severely out of shape i was having trouble coming up with anything.  putting my bike in the car could have been the event, but i decided i should do something  a little more.  i couldn’t come up with anything interesting so i decided that i should go out and ride.  i started out going to do my regular old ride…the devil’s back bone.   as i pulled in to the parking lot i was feeling a little unenthusiastic…after all i’ve done this trail so many times i might be able to do it blind folded.  i just remembered this trail someone told me about a while back not too far from here…at least it will be something new… for my birthday.

bobcat ridge; almost 12 miles out and back, and 1500ft of climbing in the first 4miles.

i don’t remember when they had the fire, but it doesn’t look like it was too long ago. 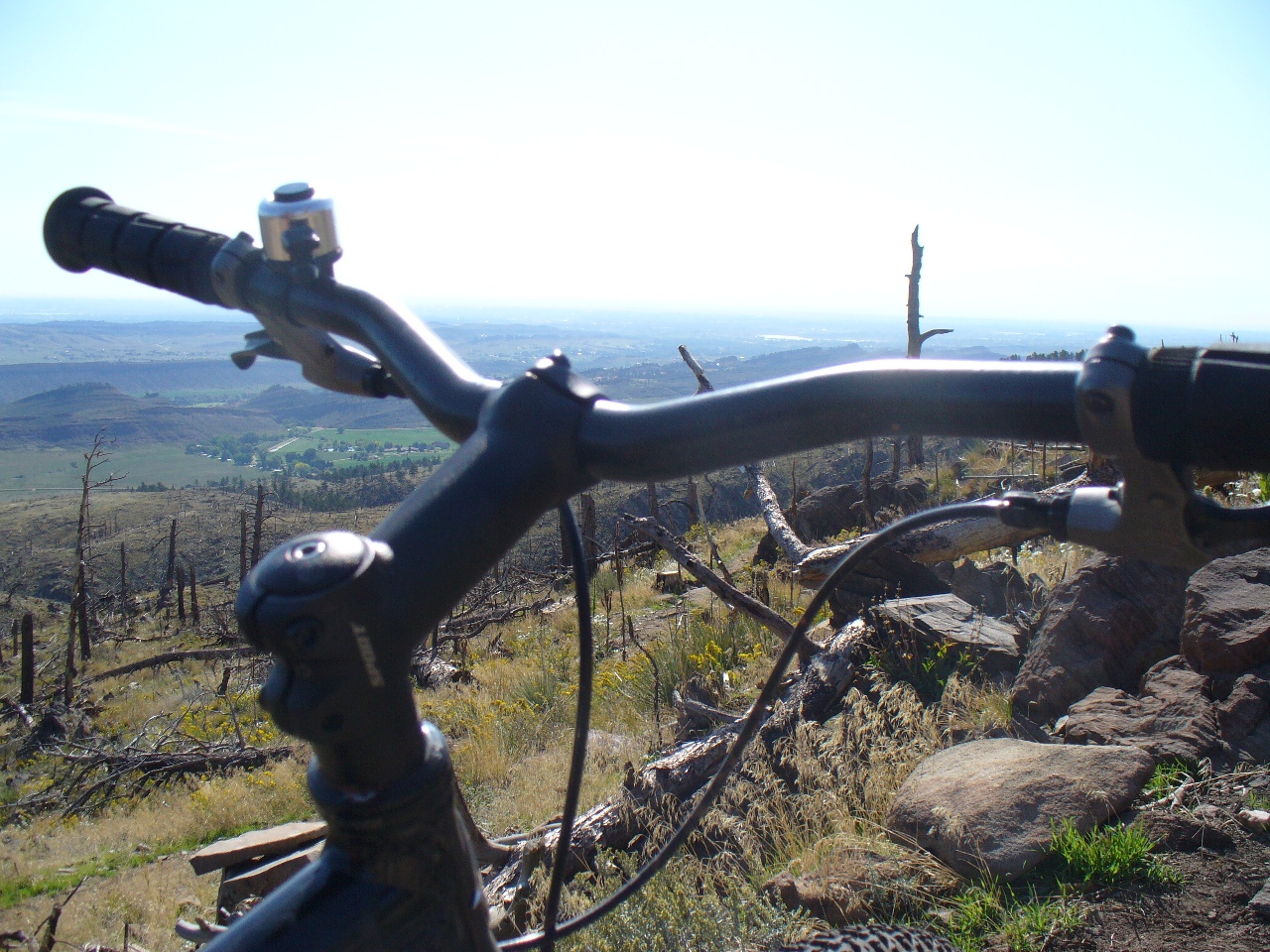 nice racing stripe in the rock. 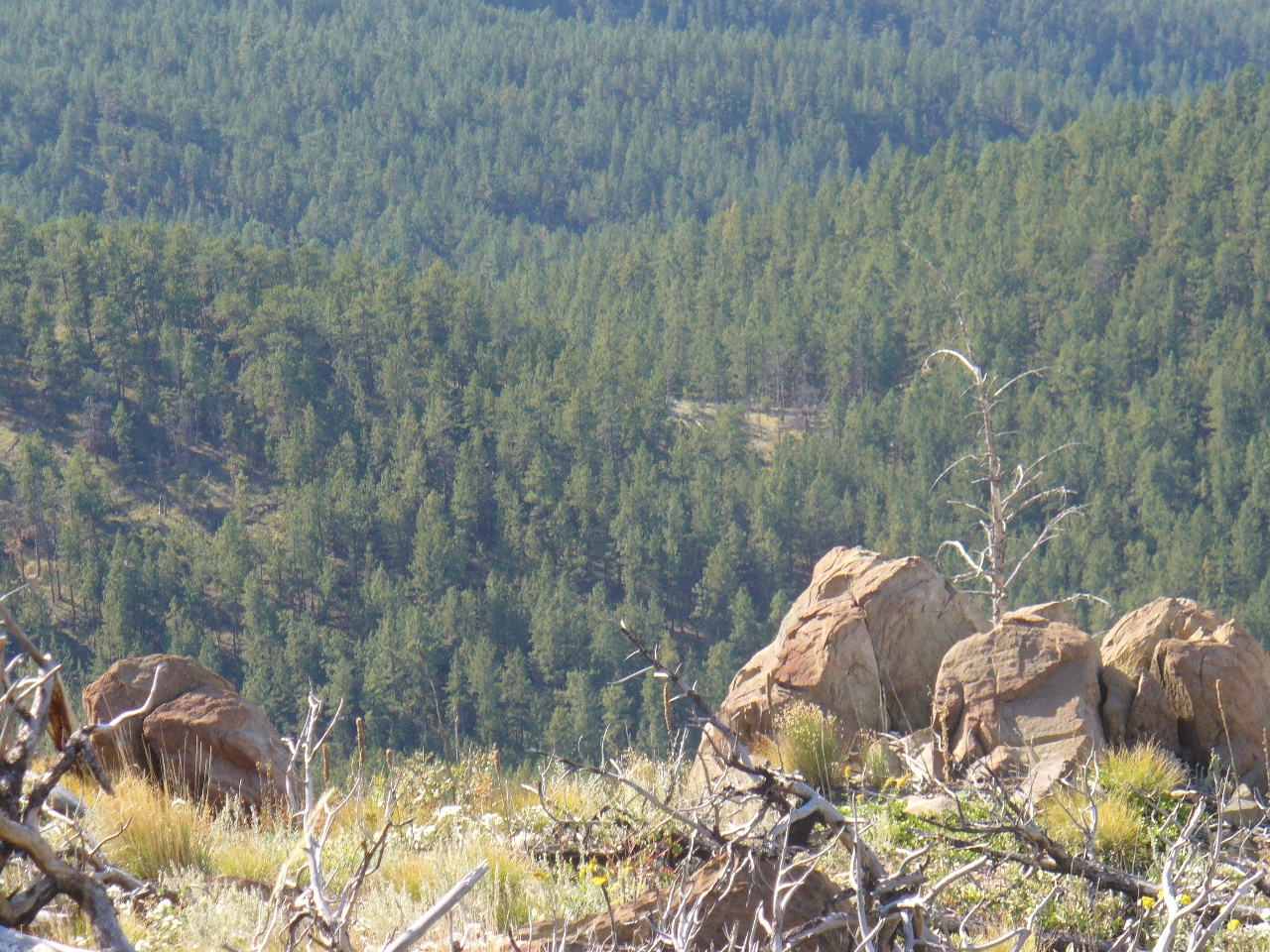 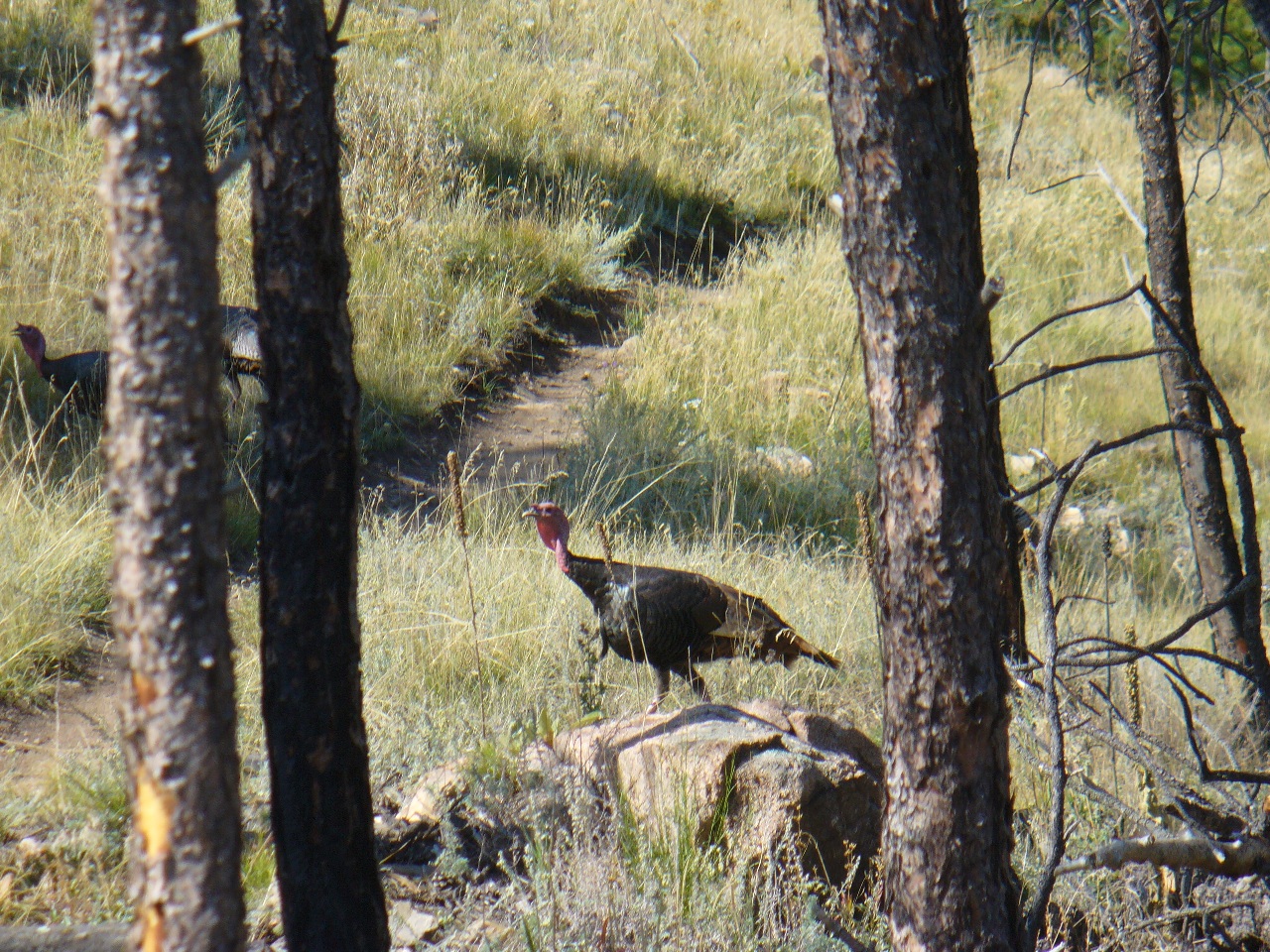 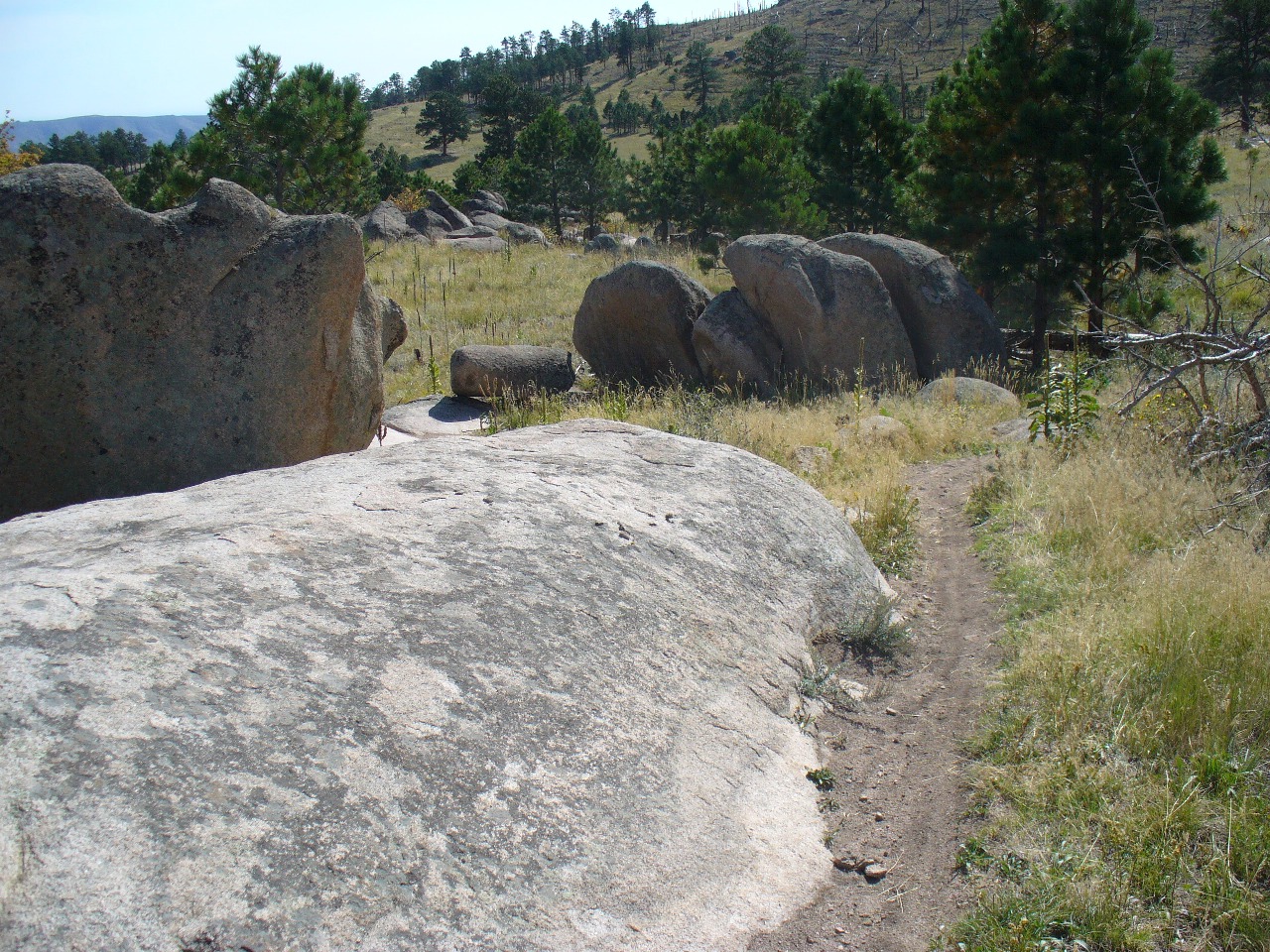 it was a pretty tough climb up to the top, especially since i was out of shape, and my bike is a single speed.  i can’t wait to climb this when i’m in shape.

happy birthday to me!

fat out of shape prairie dogs

0
a few weeks ago i was out running around new jersey.  i was running around the hotel which is in this industrial area.  the industrial areas in nj are a little better than most places, because they have lots of trees and grass around them.  i was running in this one area that looked like a park, lots of grass, a little pond these really nice trees…and these funny little animals.  at first i thought they were prairie dogs, or beavers… i had to wait to see its tail, then i ruled out beaver.  i couldn’t figure out what it was, and to be honest, i don’t think very well when i run…so i just left it as a really fat prairie dog.

yesterday, my friend/coworker told me that he was out running around the hotel, and saw the same fat out of shape prairie dogs….and they were in fact ground hogs!

i hope they take master card 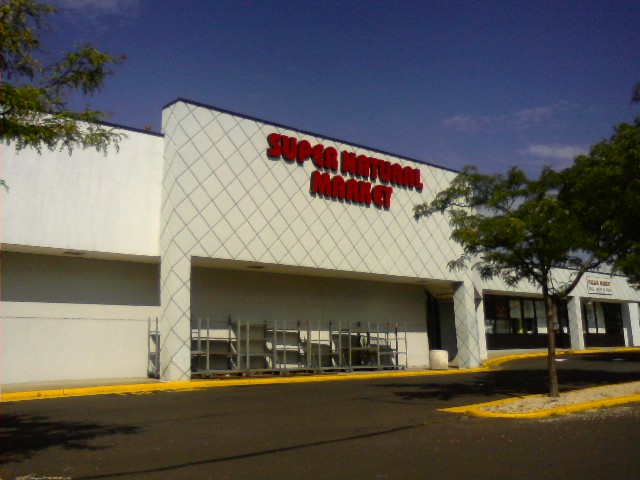 …because there is a lot of supernatural stuff i need.

1
well atlantic city was pretty fun, but today was the “big” day.  i didn’t have a bike to take with me on the train, and thank god! the train system in new jersey/new york is very crowded. i don’t know how i would have brought one with me if i had it.  just as well, i was pretty over whelmed just getting on the right train. 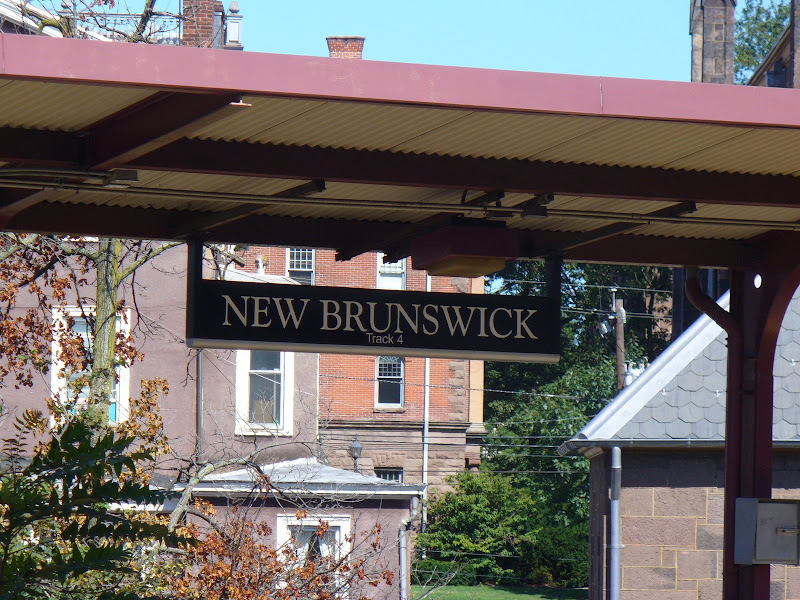 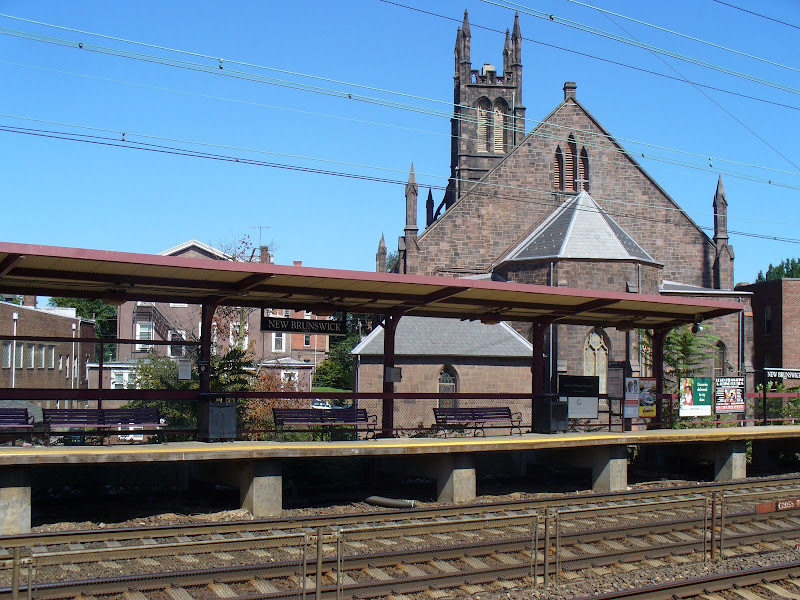 i was pretty excited entering new york, i took a bunch of photos of seemingly nothing. 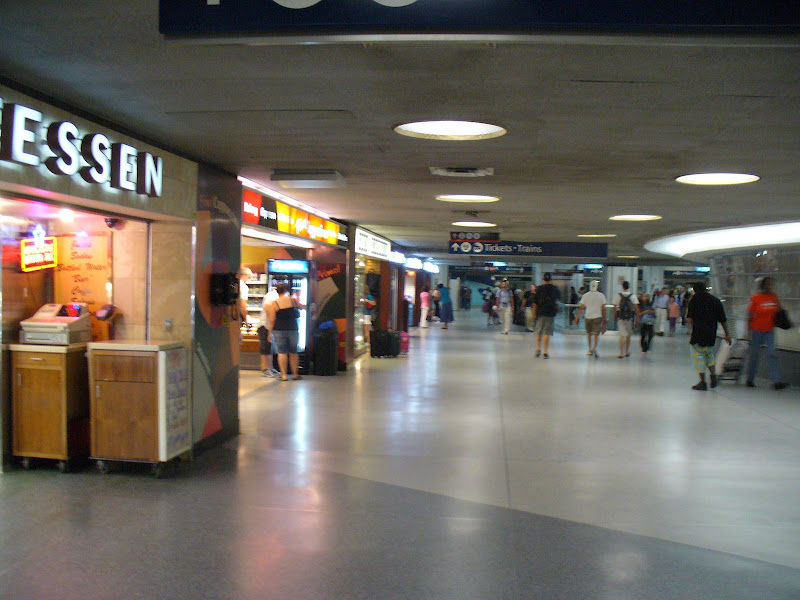 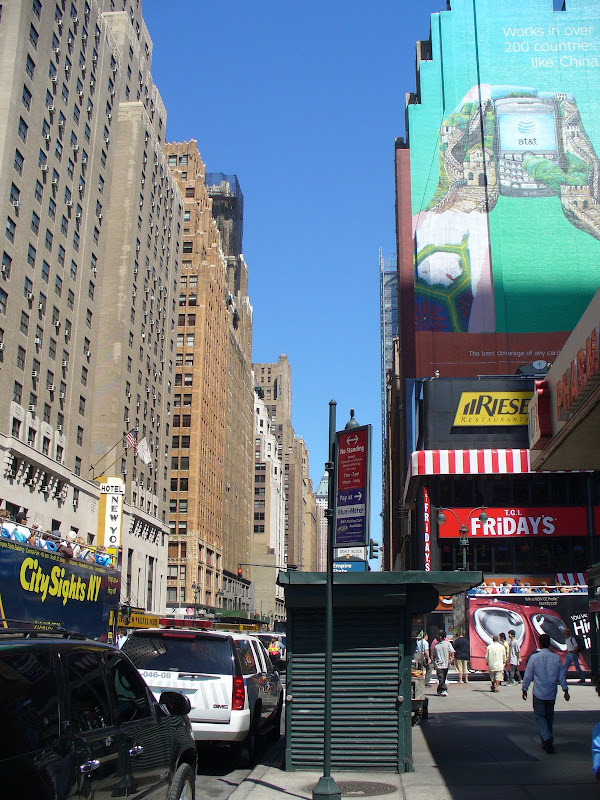 my first order of business was to find a bike shop, so i could rent a bike.  i had a list of about 20 bike shops in manhattan, with addresses and phone numbers.  the streets are very well numbered and square [unlike jersey] so it is pretty easy to tell how far away things are.

i walked about a mile to the first one on the list.  when i get there it was closed, despite their claim of being open on sundays. wtf?  i’m gonna get pretty tired if this keeps happening.   i decided to call the next one on the list.  ahhh, they were open, “buy the way…do you have any bikes for rent?”,  good thing i asked that one, because they were all out.  next one on the list, 1.5 miles away [i guess], they had plenty of bikes.  i walked over there and tried to get some money out of an atm along the way.  nothing real different than atms around colorado, except that you have to use your card to get into the atm room.  the first one i went into, i had a couple of people piggy back me as i went in. that was kind of disturbing… i felt like asking, them to kindly wait outside becasue i didn’t feel comfortable with them in the room. but i did not.

so the bike shop was so cool. really small and cluttered, with spiderwebs and dust, and bike stuff i had never seen.  i ended up renting this old cannondale, with the seat height set for a person 5 feet tall.  i tried to rent a lock as well, but they didn’t rent them. they only sold them for 150 dollars!! can you beleive that?  150 dollars for a bike lock!  after he told me the price, he said, “you are completely responsible for the bike”….. that kind of scared me but, i pushed it to the back of my mind so i wouldn’t spoil my trip.   then as i left the shop, a thought occured to me, what if i get a flat? what if the chain breaks? i have no tools….. again, i suppressed those thoughts as well.  woo hoo! off to the hudson river. 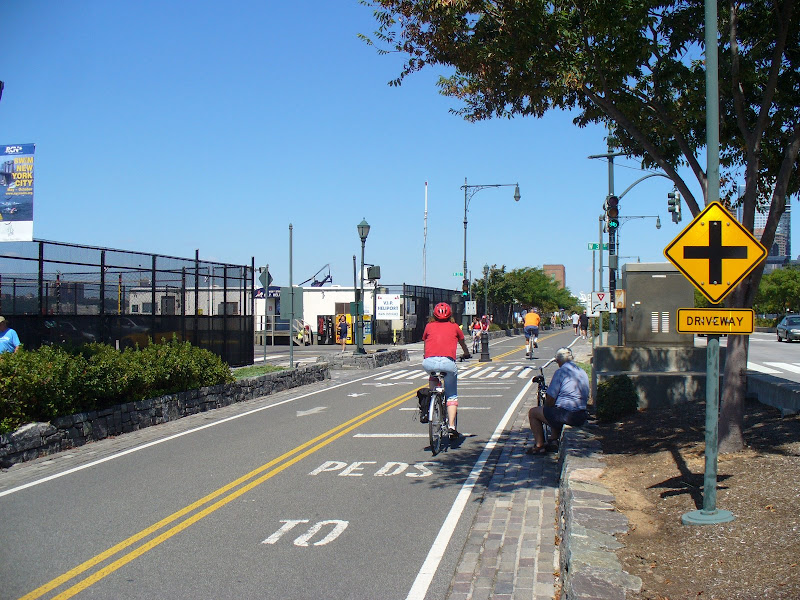 as you can see from the photo, they have very nice bike paths.  i rode this north for a while then headed inland to central park.  note: since i didn’t have a bike lock, i couldn’t go into a restaurant to get some food. i had not eaten all day and it was already close to 3pm.  i pressed on… 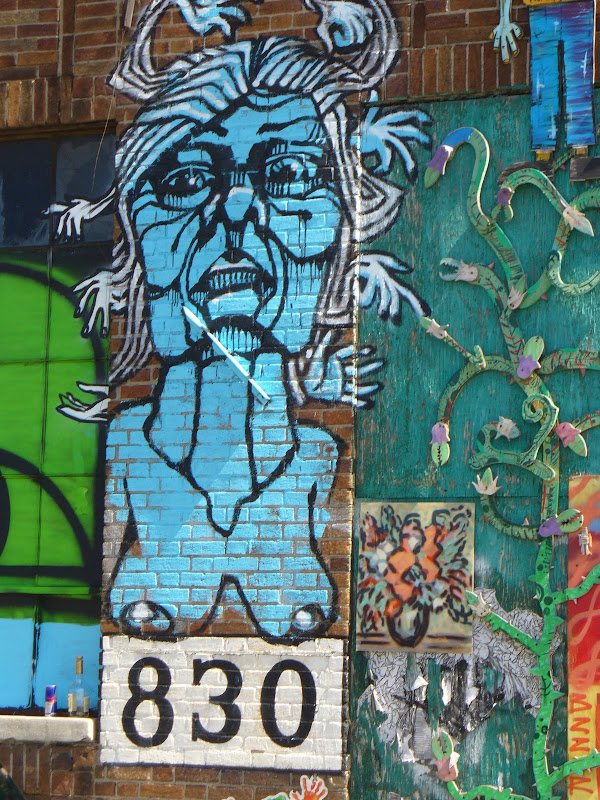 this was some really cool graffiti along the way.  the street artist are so good over here.  this wasn’t even the best one i’ve seen, but still better than anything i’ve seen in co. 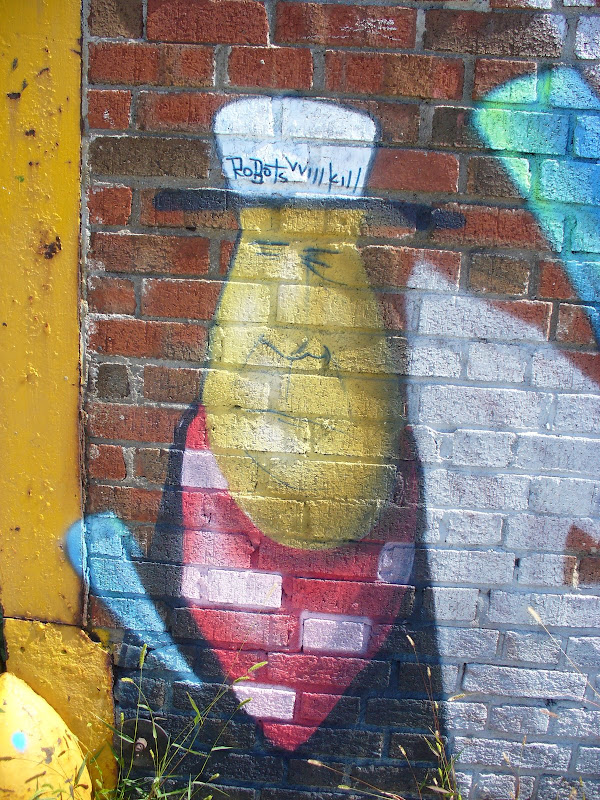 i liked this one, because it speaks the truth…..”robots will kill” and they are killing me! 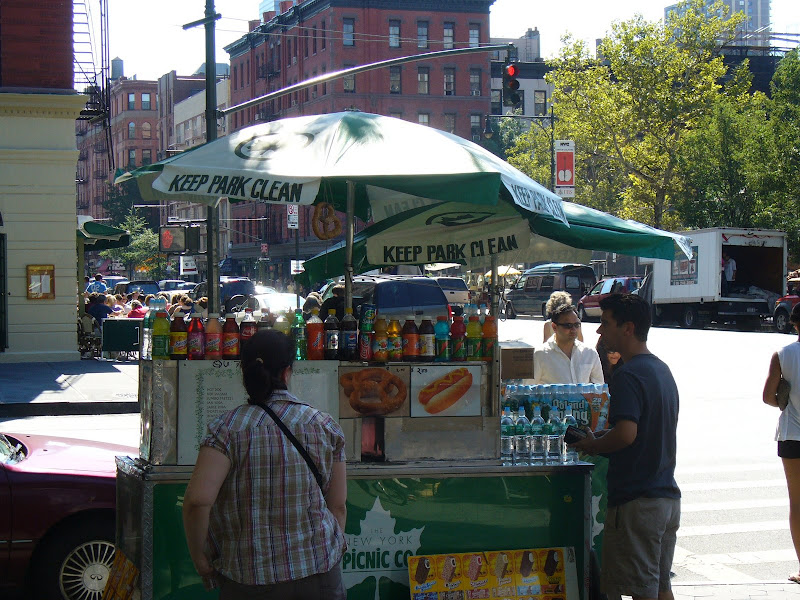 i found some food, and i must say, this was the best fucken hot dog i’ve ever eaten! i ordered a “hot sausage” which i thought was going to be like a brat or something… but it turned out to be a hogdog with hot spices in it.  oh my god it was perfect! i don’t even like hot dogs that much. i was going to order a bunch more, but i decided to try something else later.  as i write this i am still thinking about this hot dog…….sigh.  note: there could have been other factors contributing to my love for this hot dog, like i was starving…and i was outside [camping effect]. also note: i remember saying something similar about a taco bell burrito once.

so one of my dreams as a an adult, has been to ride a bike through new york.  at first i was just sticking to the sidewalks, and paths, but then they became too crowded and i move out to the street.  it was like a shot of adrenalin as i jumped out to the street, passing taxis and buses.  it was more of a rush than any mountain bike ride i’ve ever been on.  i think all the people around helped for the rush.  i rode through time square! 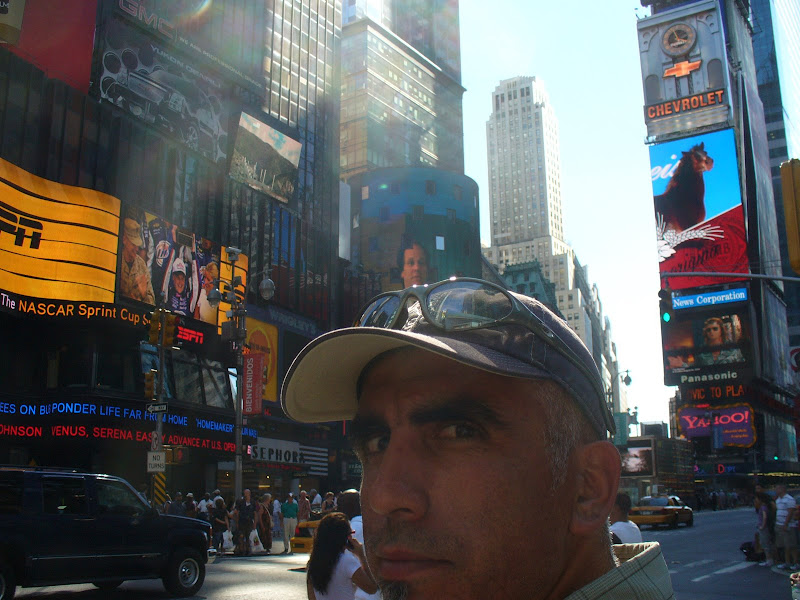 if i look unhappy, that is because i the sun was in my eyes.

when i was trying to return my bike, i was riding really fast through the city, so my rental time would not be so high. as i was looking for the shop, i went down the wrong street.  i stopped to look at the piece of paper with the shop’s address on it and the while i was stopped, there were a few people near by and one was this old hispanic looking guy.  he looked at me with a smile and said, “today jor first day?” i just kind of laughed and said, “just one street off”.

check out my album for more photos. 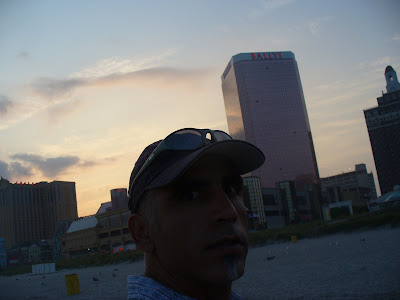 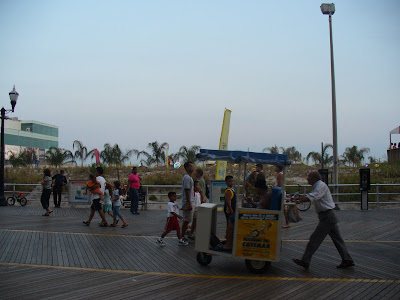 they have these “taxis” along the boardwalk, where they push you around like a baby stroller.  it’s kind of funny to see grown people being pushed around in a stroller. 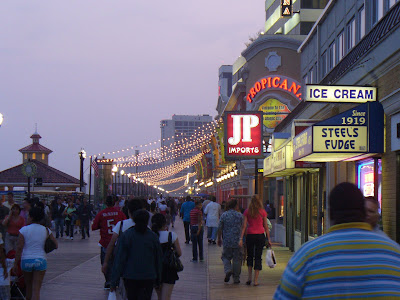 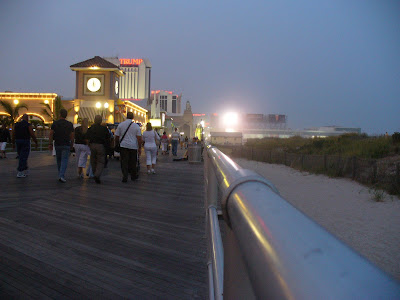 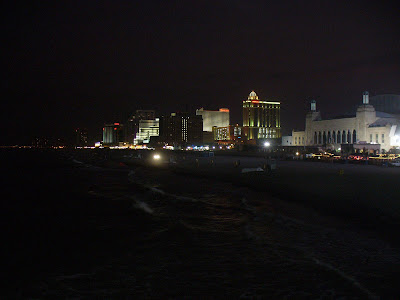 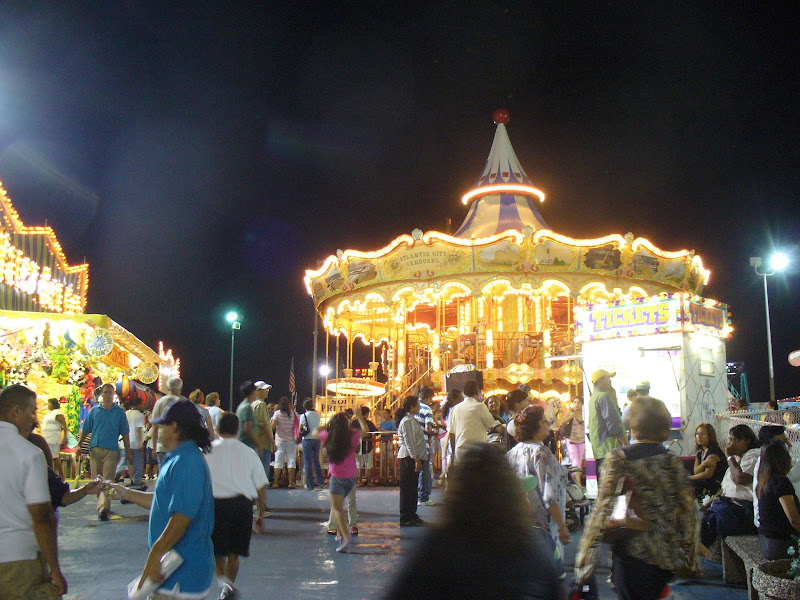 0
i’ve been in new jersey for the past week due to work.  it’s been going well, except that i needed to be here for the next week. my company wanted to fly me back home and out again after the weekend.   so i decided to stay. granted i would be alone this whole labor day weekend, but it should be ok.   i’ll probably be missing out on some bike riding this weekend, as well,  and god knows i could use the exercise.

so while i am out here i developed this elaborate plan to enjoy nj and ride a bike.  i found this place called the new brunswick bike library. they are a community run bike shop.  they take old bikes and get them into working condition, and sell them or loan them out to members.  membership cost like 20 bucks, and you have to volunteer your time.

i entered the address into my gps and headed off to get my bike.  as i start getting close the neighborhood starts to look less and lees like a bike shop would be there.  my gps said, “your destination is on the left”…. are you kidding me?!? i didn’t see anything there just some big old green  building with no sign.  there was also no parking either.  i had to park about a mile away and walked over there to check it out. i get there and there are no signs anywhere, except for one that says, “deliveries use the side door”.  so i start peeking around the side and back yard and see a bunch of old bikes. this must be the place.  too bad there was no one around.  so my plan was over. no bike.

this actually turned out to be a blessing….