leonard published 6 years ago in Uncategorized.

this weekend, my oldest son (dom) and i went to anchorage alaska.  we started out on saturday morning about 11 am.

i am not a fan of flying, but it was pretty nice to sit next to my son.

it was just your normal flight, until we were above the juneau and glacier national park. 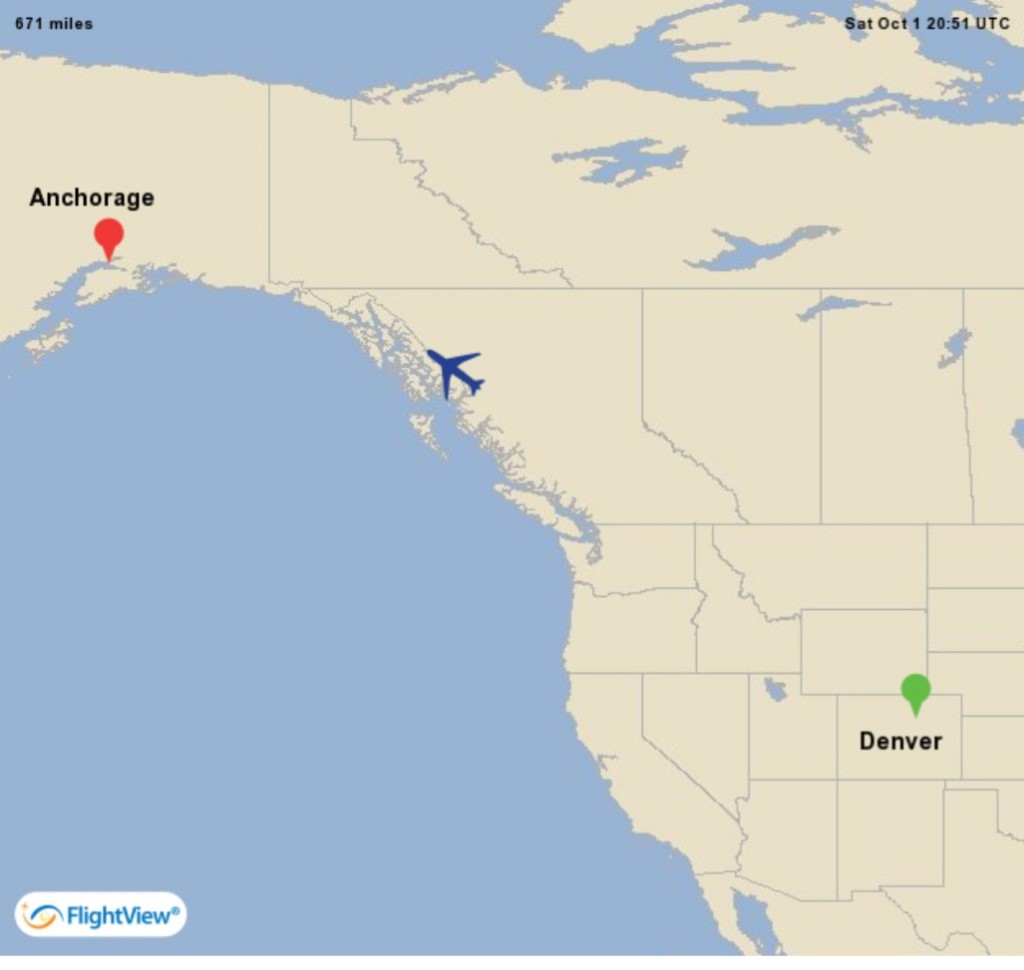 i had never seen a glacier before so i was extremely excited to see beautiful rivers of ice and snow reaching out to the sea.  it did seem a little bit sad to see one of the glaciers had broken pieces that had fallen into the bay.  i didn’t really have any before or after pictures to compare this to, but it looked pretty abrupt to see such a thick glacier going very far into a warm looking area.  i kind of thought they would end more gradually. 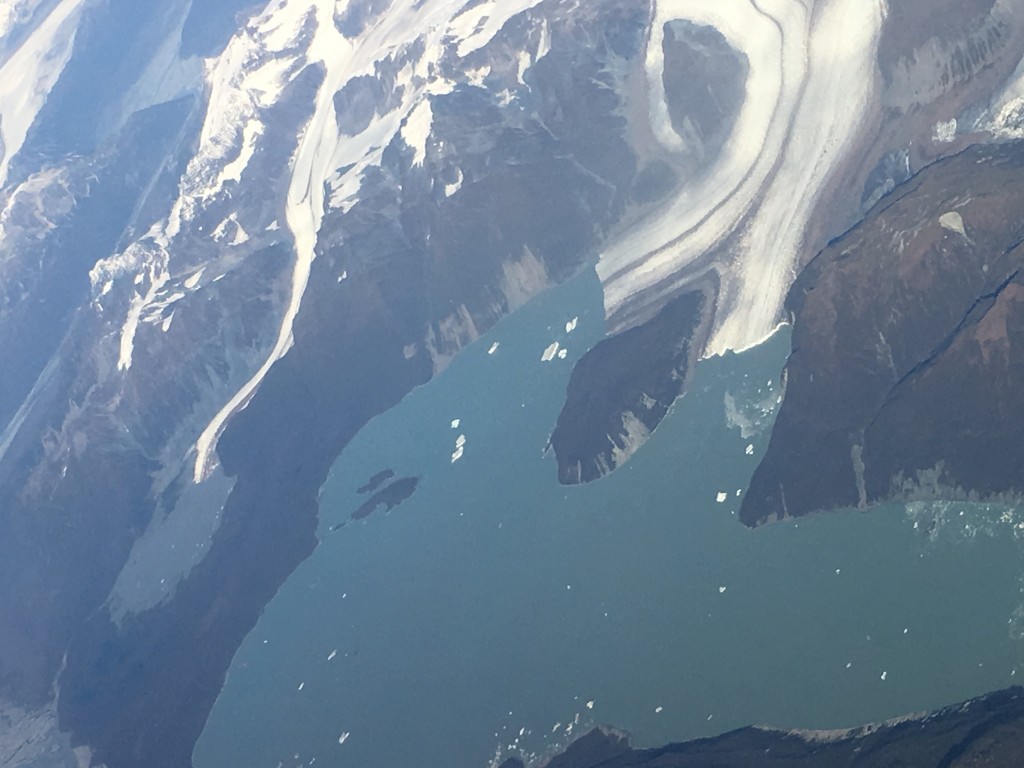 here is a time laps video flying over the hubbard glacier.

apparently i’m really into glaciers… you should see how many pictures i took! 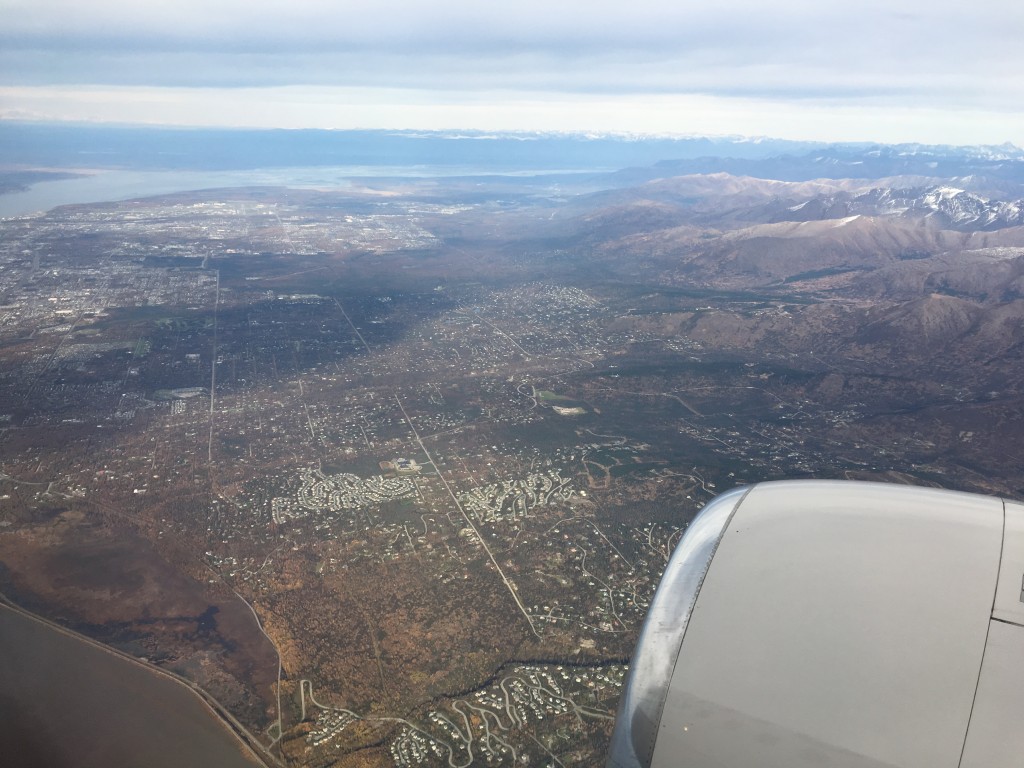 so when we got closer to the airport, we noticed that the bay looked like mud… apparently that’s what it looks like during low tide. 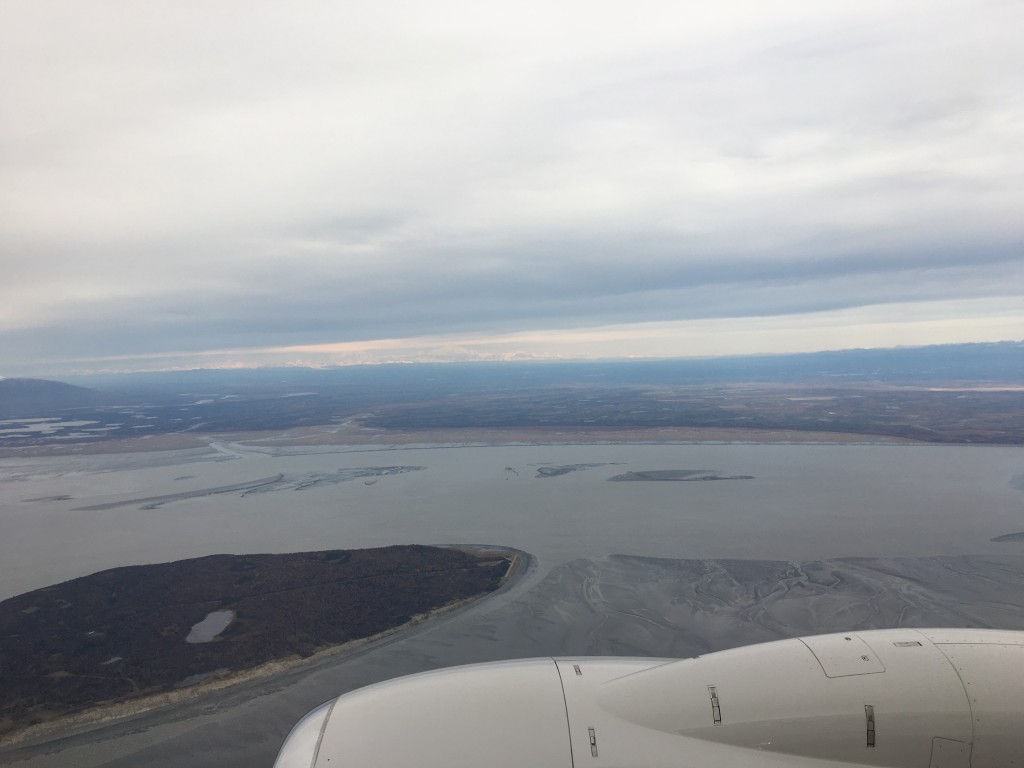 so after about 5 hours in the plane we landed in anchorage.   both of us were starving, and we had already typed into google maps “reindeer dogs”.

we found a street vendor outside the convention center where an “anime convention” was going on.  i didn’t take any pictures of the people who dressed up… but it was interesting. 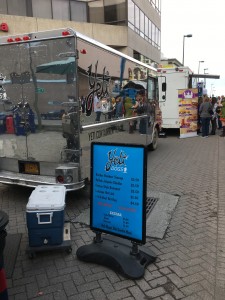 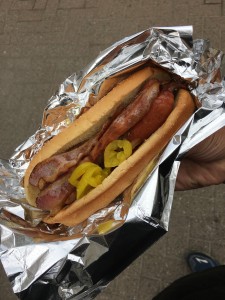 i was planning to go for a run as soon as i could but it was just too late in the day to find a trail.  besides, trail running in bear country is not something you do at the end of the day.  dom and i decided to just drive around.  it was a cold and grey 49 degree day … but it felt much colder. 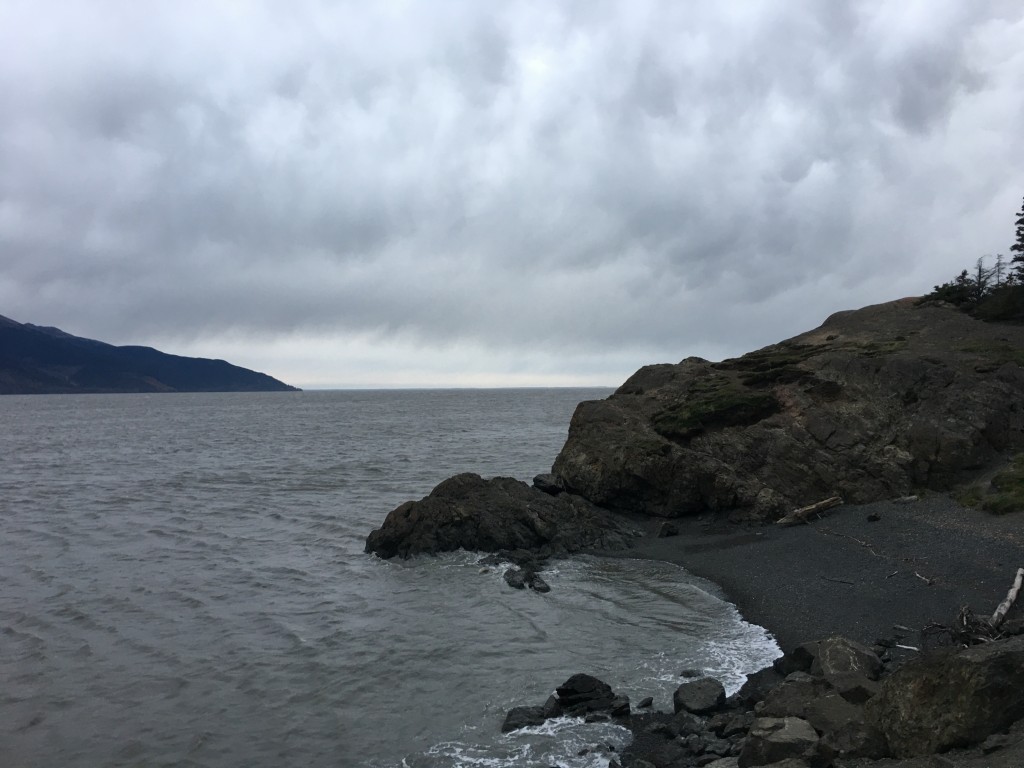 we drove south for a while.  it really didn’t matter where we went because everything was so different.  we just wanted to be in alaska… didn’t really care what we were looking at.

after driving around for a few hours it was time for dinner.   again, we had a very specific goal to have fresh salmon.  we found the “f st. station”. fresh wild salmon is unbelievably delicious!  that alone is a reason to justify a trip to alaska… haha. 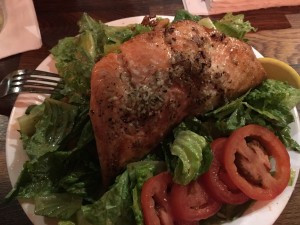 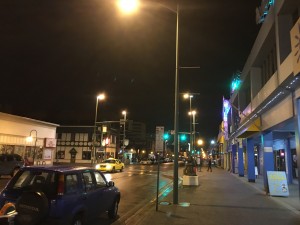 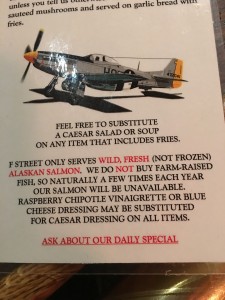 we had hoped to see the aurora borealis that night, but it was raining a bit and the clouds had blocked any possibilities.

the next morning i woke early to go for a trail run.  i wanted to be done before dom woke up so he wouldn’t have to kill time in the hotel, while i was out running.  i started getting ready at 5:30 am and left the hotel at 6am.  i was driving out to the trailhead, but it was pitch dark.  i stopped at a starbucks to get some coffee and kill some time.  by the time i got out to the trail head it was about 7am and still dark. i had to kill more time, but i was already an hour behind schedule.  i’m not sure what time it was when i finally started but i think it was after 7:30am.  it wasn’t completely light so i ran with a headlamp.  this was one of the first signs i saw on the trail:

heh …  not the smartest thing i’ve ever done, but i continued on.   this is almost what the trail looked like at 8am. 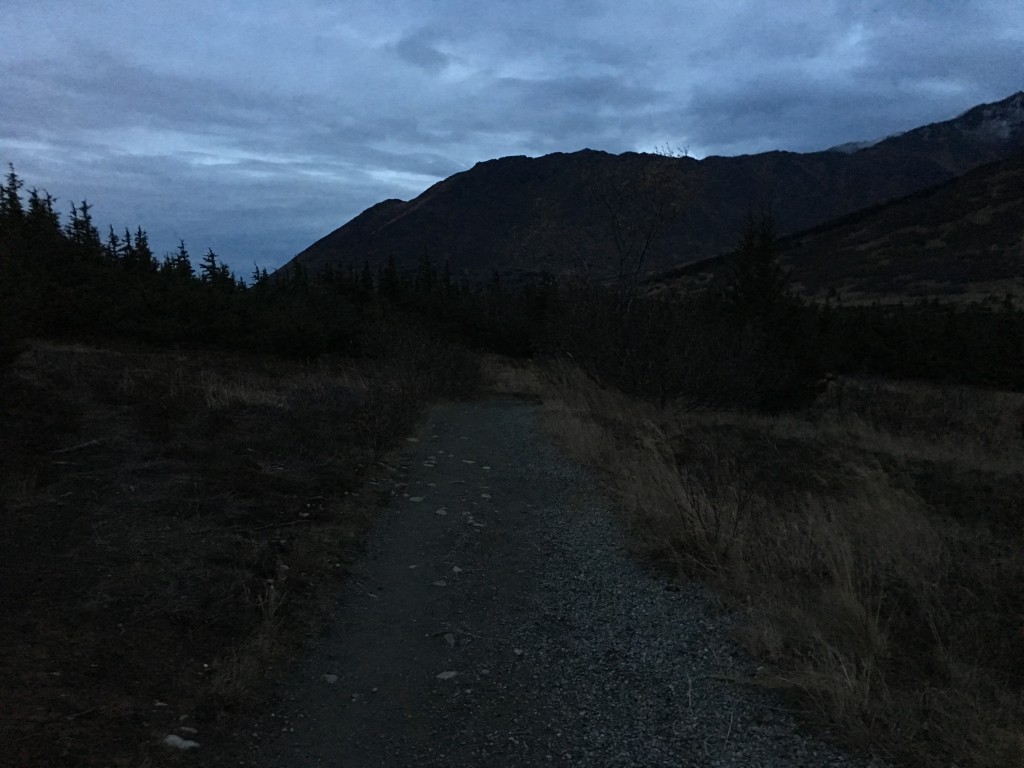 i ran along a trail/road called “powerline” it went pretty far up into the valley, but i was only going to take it about 4-5 miles then turn back.   the views were amazing.  i have pretty nice views in colorado, but something about the alaskan mountains that made everything more interesting.  it wasn’t long before i saw my first moose. 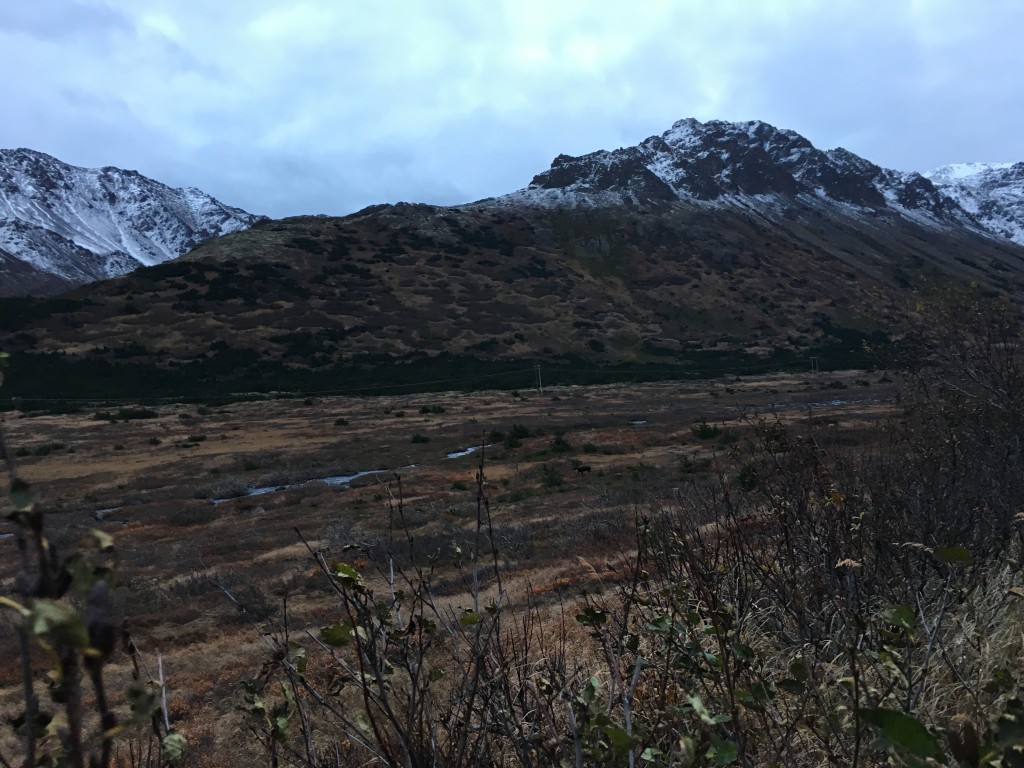 if you look just about the center of the picture you can see her.  this went on for about 4 miles… i kept stopping and taking pictures of moose. 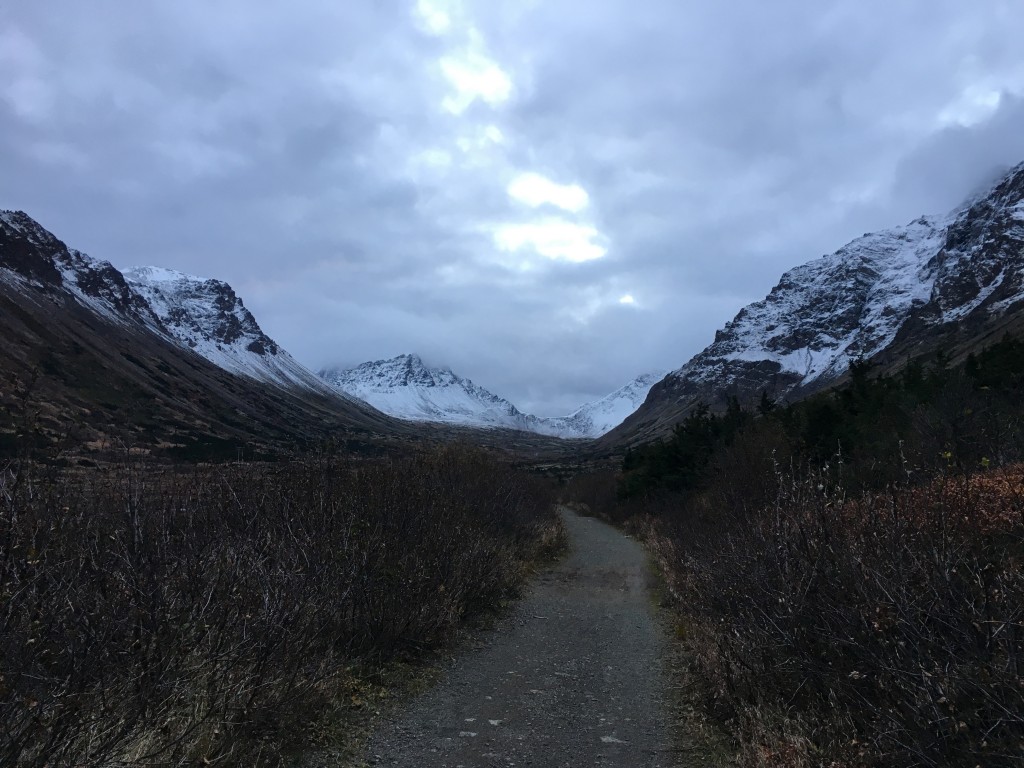 on the way back i got a little closer to a bull moose. unfortunately i didn’t have my camera out in time and he already crossed the road.  i turned on the camera to record some video.  you can hear my narration i was a little nervous because i was so close.  i had to get by but also i wanted some good video.

right after i shut off the camera the bull moose gave out a loud exhale puff through his nose.  it sounded like a bull right before he charges the bull-fighter.

i guess i was too fast and had too much of a head start for him to even see me.  he ended up coming back out to the road and played it off like he wasn’t even mad.  :)

so that was my moose encounter.  not much happened after that. i went back to the hotel, showered and dom and i drove up north to see if we could see mt denali.  it was a pleasant drive up to the town of talkeetna.  we stopped at a old general store and bought a snickers candy bar. 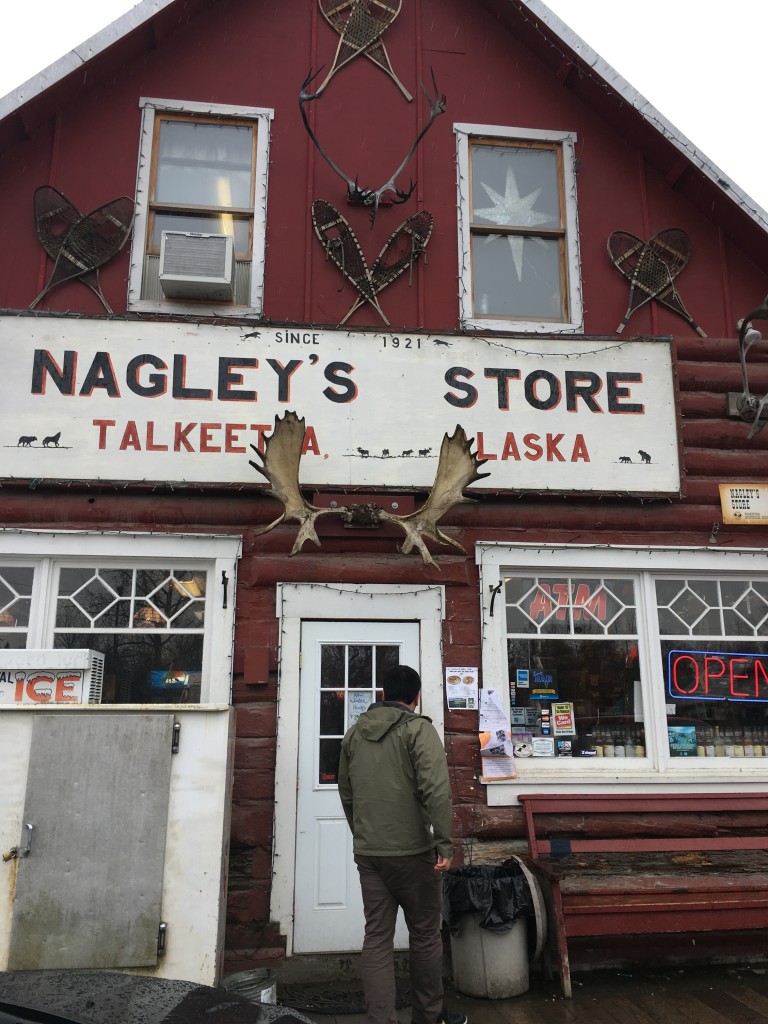 it was too cloudy to see mt. denali so we headed back to town.  dom is an airline pilot and he love everything to do with planes.   this was a runway… 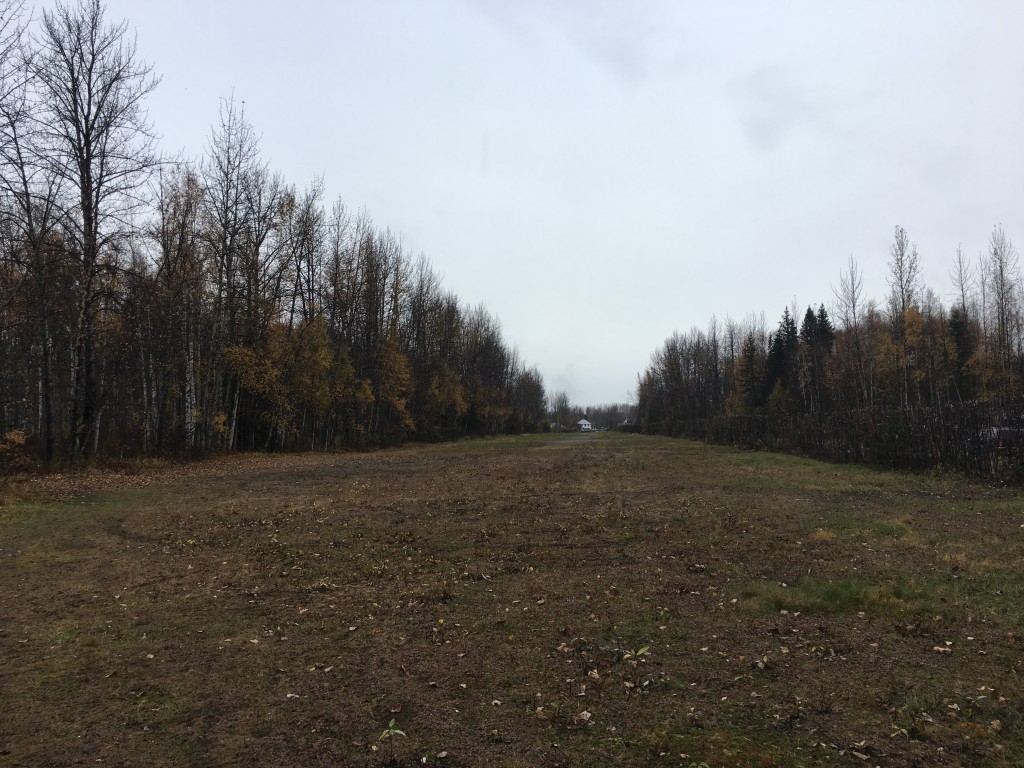 this was a little “airline” that gave tours of denali national park. 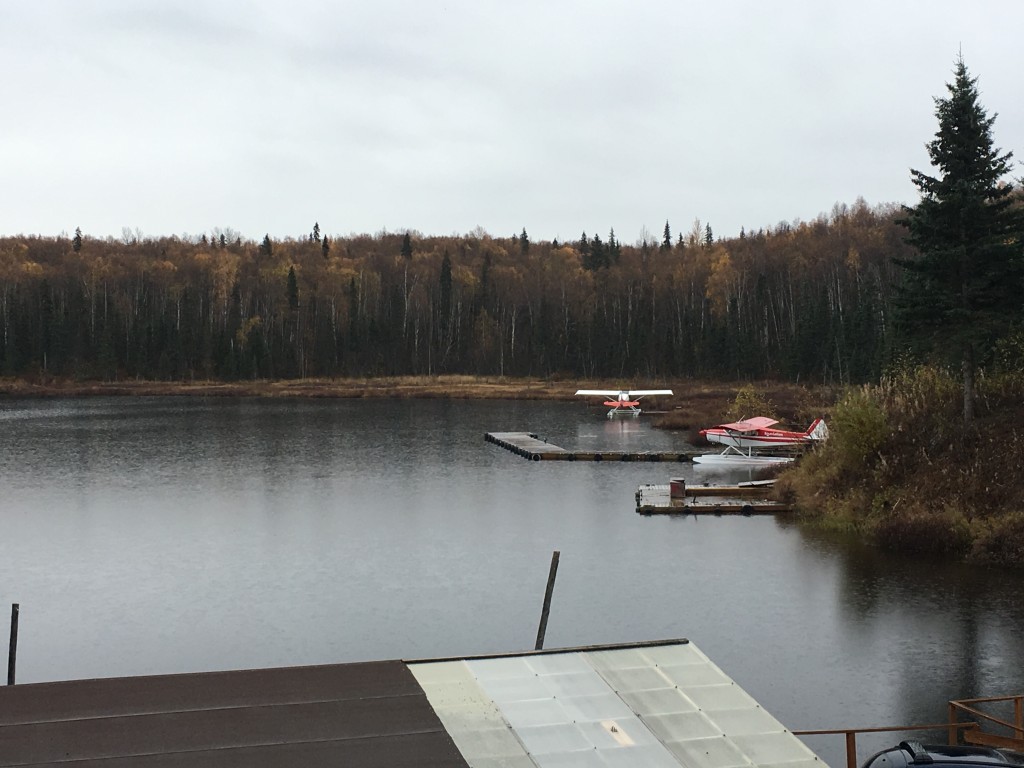 we then went for a hike up flattop mountain. we decided not to summit, because we were both getting kind of sweaty and we didn’t have anyway to shower before we got on the plane. 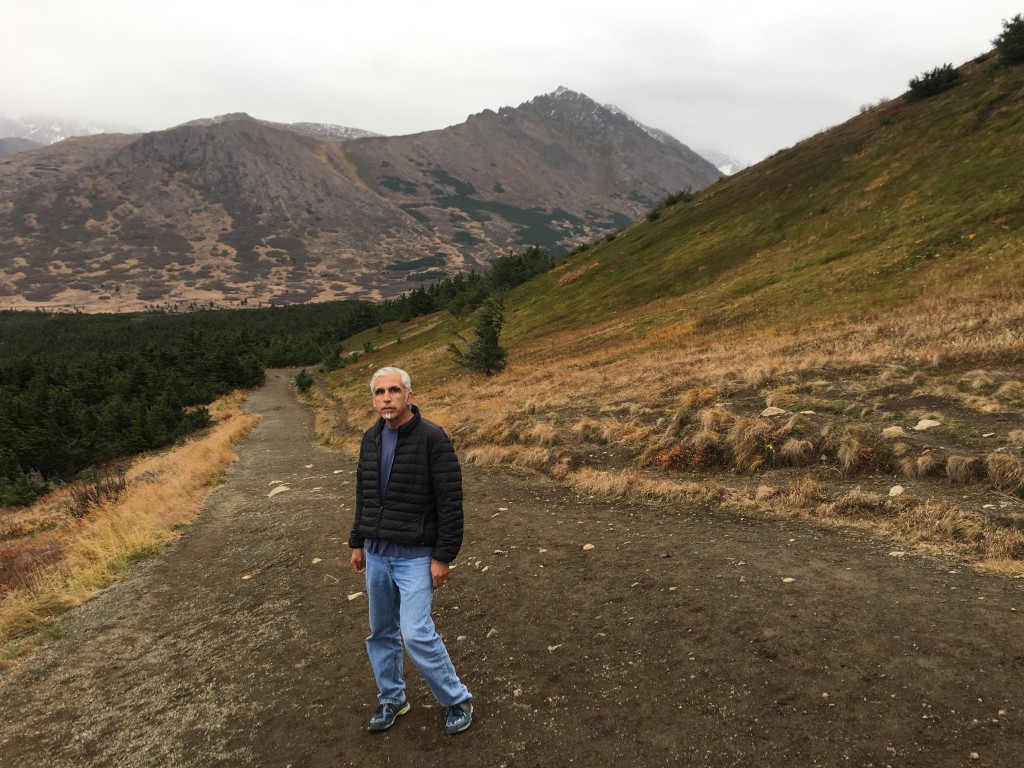 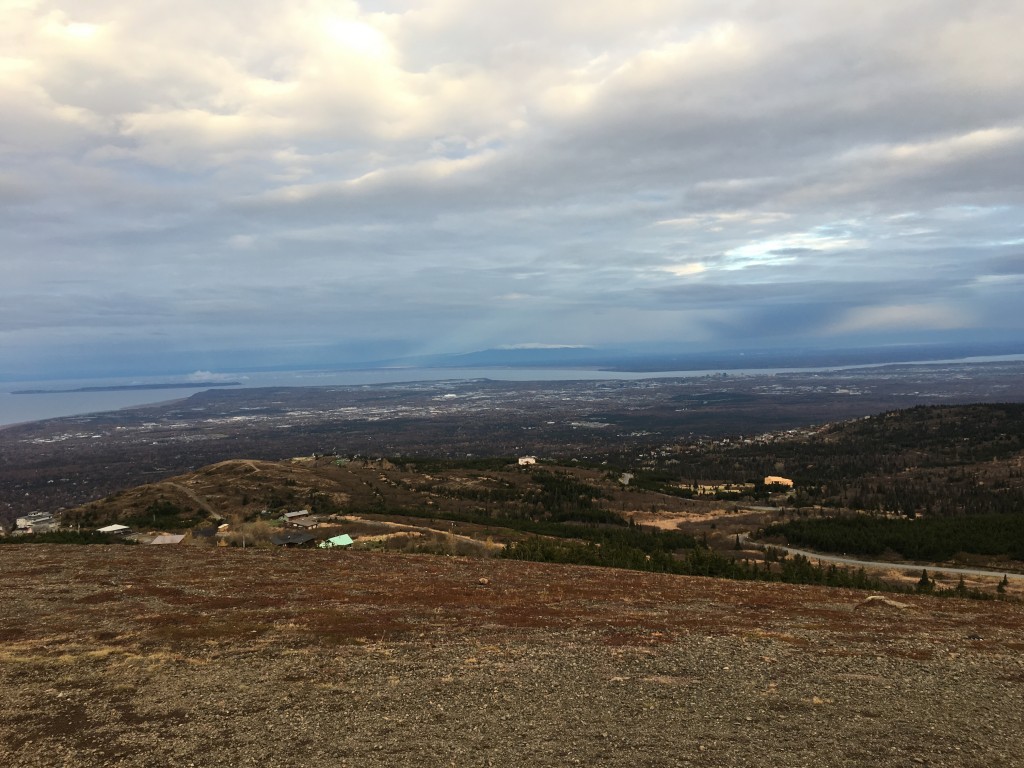 our flight wasn’t till about midnight, but we were both getting kind of tired… so we just drove around a little while longer.  as far as short trips are concerned… this was a great one. we didn’t get to do everything we wanted, but we really just wanted to see anchorage.  i got some great ideas of what i want to do next time… yes there will be a next time! .

anyway we got on the plane and took off…. it was well into the night and pretty dark as we lifted above the clouds… and just as we got above the clouds, there it was! the aurora, the northern lights!  it was beautiful. i wish i wasn’t in a plane pressed up against the glass… but it was still pretty awesome. 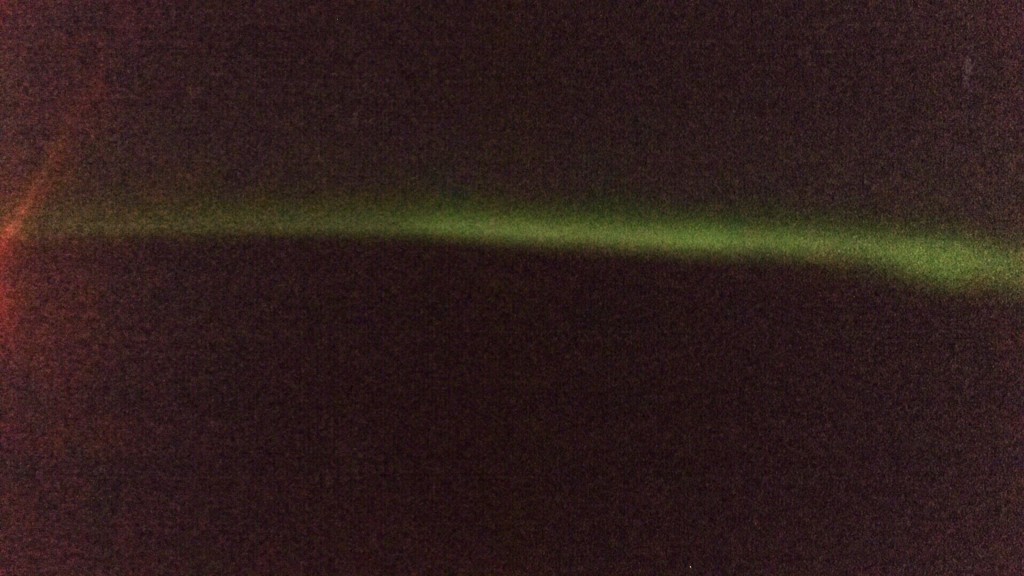 we fell a sleep and next thing i knew we were above denver….. it was monday morning by the way! 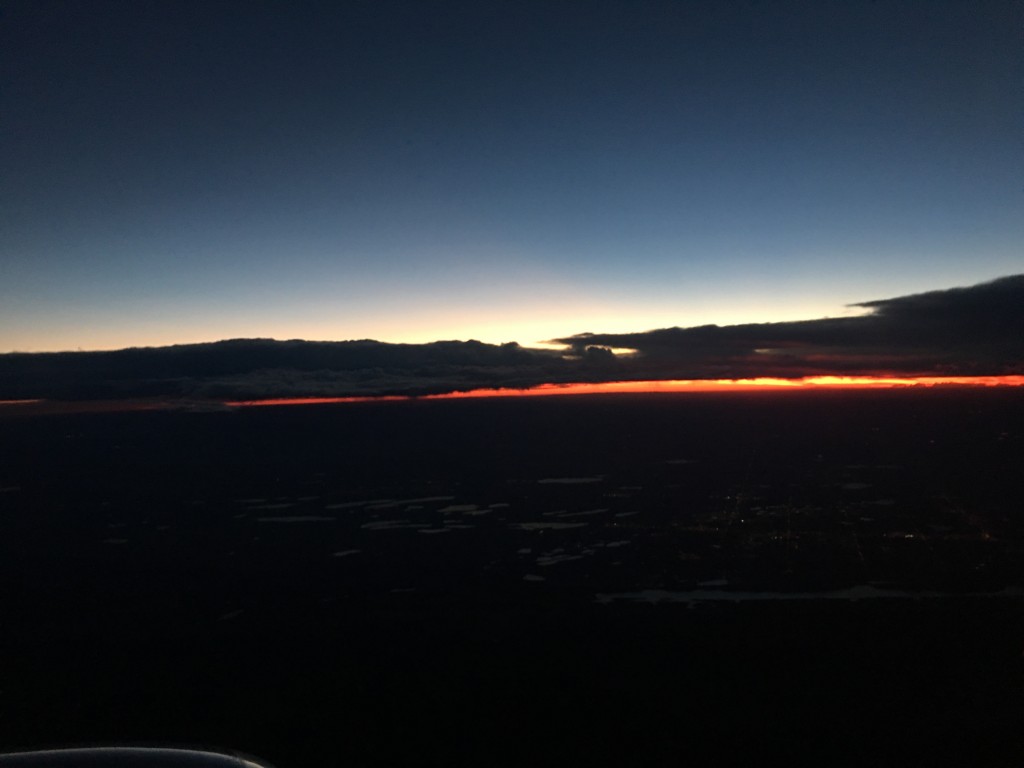 after landing and then driving home… i was at work at my desk around 9 am…. :(  what a trip.