3
a few years ago i  used to wake up  very early in the morning and ride my mountain unicycle on the trail before work.  i would leave my house in the dark and get to the trail head just before the break of light.  i loved doing this trail, i had been doing this for years, and i slowly but surely i was able to master each section. 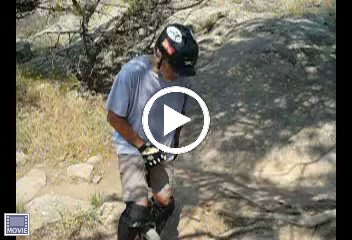 as far as safety is concerned, unicycling is actually a little safer than mountain biking.  i know most people are probably thinking that i am out of my mind for saying that, but i truly think so.  i have been riding a unicycle for so many years, i don’t even think about falling.  not that i don’t fall, it’s just that i fall so often it’s not a big deal anymore.  i fall hundreds of times, but i rarely get injured.  i always use body armor for my shins and knees and a helmet for my head.  the difficult part for me is strength and power.  it takes a lot of strength to climb hills and a lot of power to get over obstacles like rocks and logs.  falling is more like a controlled dismount.

so i guess my sense of reality is a bit twisted. when people see me riding on the trail, i always get comments like, “you’re crazy”, “you’ve got a lot of guts”, or “oh my god, be careful”.  when i hear these comments i always wonder why they think it’s dangerous. i don’t think it’s dangerous, i do think it is extremely difficult…. and yeah, i think i am “crazy” for attempting something many people can not even do on mountain bikes.  i think i have “guts” for not giving up, even though every muscle in my body is trembling, my heart rate is well over 180, and i’m sweating so profusely, it looks like i just had water poured over my head.  i don’t think of myself as a dare devil.  i don’t think i am in the same thrill seeker category as base jumpers, fmx, and other adrenalin junkies.  i think i am somewhere around the same category as a rock climber….don’t ask me why, i just think we have a lot in common for some reason.

so one morning before work,  as i sat in my car at the trail head waiting for more daylight…. i began to think.  recently i had read in the news paper that there were mountain lions killing people in california (more specifically mountain bikers).  there had also been mountain lions spotted colorado at the time, but none at this particular trail.  i worried about this for a moment but figured that my odds were pretty low.  i decided to go right then, because i wanted to get to work as a decent hour.  so i took off, and as i entered the trail i passed a sign that i had passed hundreds of times in the past, but this time it kind of stuck in my head.

for the next couple of miles that was all i thought about.  as i passed bushes and rocks the thoughts of a mountain lion stalking me began to take over.  the fact that i was breathing extra hard and looked rather vulnerable to a mountain lion, made me even more worried.  what if i did get attacked and even killed that morning? the head lines would probably read:

in my imagination i could see mr. public in his robe and coffee reading the paper with his family around the breakfast table.  he shakes his head and says, “shouldn’t have been unicycling”